Dylan Ratigan Explains The Financial Crisis To Children With Puppets 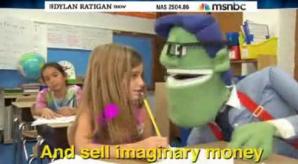 MSNBC anchor Dylan Ratigan is never one to shy away from using props to make his points, usually about the financial crisis. Some would say he’s trying to be MSNBC’s Glenn Beck (he’d love Beck’s ratings, of course).

Well yesterday saw something Beck would likely be proud of – the bank bailouts, explained to children, through the use of puppets.

Through the puppet troupe (or something) “Story Pirates,” which Ratigan has used once before, a four-minute video featuring puppets and children was produced. Here’s the backstory.

The video stars “E.Z. Money,” a puppet with the personality of Harold Hill from The Music Man, with a slogan sure to appeal to the kid’s he was pitching to: “I can make money without having to work hard, invest wisely or have any talents whatsoever. Kids, if you want something you have to take it.”

The subsequent song, which was admittedly pretty catchy, featured lines like “When it all falls apart, and the shit hits the fan, you can still pay yourself and send the bill to Uncle Sam.” The big enemy in the segment was “American Finance Freedomization” (or to put it more succinctly “deregulation,” said Money), and the song ended with the children chanting “change the law.” The whole thing wrapped up with a cute kid in the front row, head in hands, declaring, “We’re all doomed.”