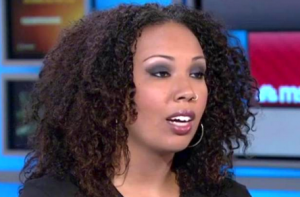 EBONY magazine senior editor Jamilah Lemieux had a slightly different reaction than most to the sappy love note Seattle Seahawks QB Russell Wilson sent to his girlfriend Thursday, tweeting that she was happy he divorced a white woman and dated a black woman instead.

IDC if Russell Wilson dresses like Joey from Full House. He divorced a WW when he signed a big contract and got with a Black single mom. ?

For those who don’t speak Twitterese: “I don’t care if Russell Wilson dresses like Joey from Full House. He divorced a white woman when he signed a big contract and got with a Black single mom. Greatest of all time.”

Yes, indeed; how dare Wilson marry outside his race? By the way, the “black single mom” Wilson is dating is Ciara, who has an estimated net work of $15 million. Not exactly a charity case.

Lemieux is best known for opining on MSNBC that country music is all about killing Muslims. That comment was so bad, host Ari Melber had to immediately issue an on-air apology.

Before that, RNC chief Reince Preibus called on EBONY to apologize after she attacked RNC staffer Raffi Williams as a “white dude telling me how to do this Black thing” (Williams is black). EBONY later did issue an apology.

When called out for her tweet, Lemieux doubled down:

Black women have had to deal with the societal notion that White women are superior, but watch me get attacked as “racist” for that joke.

“When he get on, he leave your ass for a White girl”-a punchline in one of Kanye’s most famous songs. But here comes the attack on me.

I’m ranting because right wing bloggers and black men are in my mentions, of course.

Do I have a problem w Black men marrying White women? No. But that trophy thing is wack. So, yeah, it’s cool to see Russell defy the norm.

And White men pretending to be offended by what I said may be the funniest thing ever.

For the record, the “right wing blogger” and “white man” in her mentions is yours truly. I’m actually Hispanic and Irish, but apparently my mother should leave my father. Sure they love each other, but some hack racist on Twitter can’t deal with their relationship, so that’s that.