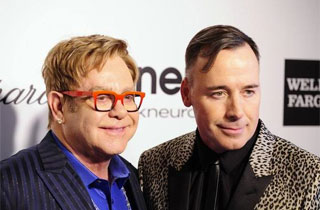 In discussing his upcoming wedding plans with his partner David Furnish, Elton John added that he thought gay priests should be able to marry as well — and that Jesus would have been cool with it.

“The church hierarchy, the traditionalists, might be up in arms about it but times have changed. If Jesus Christ was alive today, I cannot see him – as the Christian person that he was and the great person that he was – saying this could not happen,” John said in an interview with Sky News. “He was all about love, compassion, forgiveness and trying to bring people together. That’s what the church should be about.”

He also praised Pope Francis for his “humility” and more tolerant views on homosexuality, adding that the Church of England could stand to learn from him: “He’s stripped it down to the bare bones and said it’s all basically about love and inclusiveness. That has to be encouraged by the Church of England as well.”

And in a move transforming him into an ambassador of gay pride, John added that he hoped to meet with Vladimir Putin, according to the Guardian:

The performer offered to introduce Russian president, Vladimir Putin, to members of the gay community earlier this year to show the impact of “deeply divisive” legislation.

He said he plans to meet with the Russian leader when he visits the country in November.

He added: “It’s no good putting up a wall and saying I’m not talking to these people; the only way things get solved is by talking to people.”