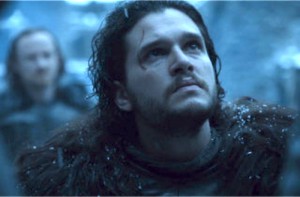 “My watch is ended.”

It’s the end of an era in Westeros. Death is not the end. Wildlings stand alongside the Nights Watch. Your bannermen say “fuck you” when you ask them to kneel. And, hey, maybe, just maybe some of the unshakeable truths the Starks grew up hearing about their family turned out to be wrong.

The old ways, the old customs, the old truths — everything everyone once took for granted, swore allegiance to, or believed in — has been tossed out the window, like poor Brandon Stark. “Oathbreaker,” the remarkable third episode of season 6, unfolds like fugue of reinventions, renewals, and transformations — as each character, in his or her turn, breaks with previously held identities, assumptions, and — yes — oaths. Not a bad summation of the show itself at this point, shorn of its allegiance to the source materials and free to tell new stories its own unique way.

Season 6’s first two episodes felt at times frayed and unwieldy: a potpourri of plot lines all jostling for attention. But in “Oathbreaker,” like all the best Thrones episode, there is a sense of thematic unity binding the disparate elements together. Whether it was Lord Umber refusing to kneel before Ramsey Bolton or Arya’s final, decisive rejection of her heritage, “Oathbreaker” hangs together as a series of meditations on the act of breaking with the past.

In an episode oriented around the premise of the rejection of old premises, Jon Snow’s return to life is the most obvious example of how such revolutions in thought and practice can work out. His resurrection is a unique triumph that recalls Thomas Pynchon’s line about how “it is not often that Death is told so clearly to fuck off.” But even he can’t help but mull over the past. “I failed,” Jon says, reflecting on his own murder.

Winter is coming, so don’t waste time looking back. “The past is already written,” the Three-Eyed Raven says. “The ink is dry.” The unspoken corollary, of course, is that the future is blank.

Severing with tradition is a risky gamble, but so is blind allegiance to it. As Alliser and Ollie found out the very hard way, convulsing at the end of a rope, gaping cold and gray-eyed at the camera in an obvious echo of Season 5’s final shot.

But for a real object lesson in how old customs die hard (nothing tightens a grip like rigor mortis), we revisited the characters in Essos. The euphemism-gilded slavers of Yunkai and Astapor have coalesced to overthrow their white-haired “liberator,” a “foreign queen who came to destroy the city and destroy its history,” as one conspirator against her puts it.

She might be Daenerys Stormborn, Mother of Many Titles, but now she’s been stripped of her armies, her dragons, her sacked cities, and even her clothes. Under the auspices of the dosh khaleen, she endures a humbling, humiliating little ritual that seems to deliberately invoke the character’s very first scene in the show — when she was utterly power- (and clothes-)less. There are perils to oathbreaking, and calling yourself khaleesi is a door that swings both ways. Despite all her victories and despite every norm she has shattered and expectation she has defied, Dany is still a slave to a Dothraki ethic that does not make room for her ambition to re-draw the map of the world.

“Oathbreaker” resounds with such reinventions and reversals: The Small Council has purged itself of the influence of Cercei and Jamie Lannister, who are plotting their next move. They are aided and abetted by Ser Gregor Glegane, a mute, zombiefied monster of a man who should, after all, be dead. And they have Qyburn in their corner, the renegade erst-Maester who never had much respect for petty conventions (like life and death). In his new capacity as the Lord of Whispers, he is re-conscripting Varys’ army of street urchins, his “birds” that are the frontlines of his network of spies. Rickon Stark returns to Winterfell in the worst possible way. Tommen finally grows a pair and confronts the High Sparrow (in a scene that seemed to go nowhere, frankly, but perhaps I missed something.) Under the cruel tutelage of the Waif, Arya truly becomes nobody. And Samwell Tarly is forced to renege his pledge to stand by Gilly’s side.

But the most profound transformation is, of course, Jon Snow’s. Everything about him — what we know and understand about his past, and what he thought he knew about his future — is about to change. Brandon’s visitations to the past are skirting close to the edge of some long-guessed revelation. His little jaunt to the final battle of Robert’s Rebellion was aborted just as young Ned Stark was about to storm into a fortress in Dorne and find his sister Lyanna… and something else? Jon’s past may be written in ink, but it has been shrewdly hidden away from him, his family, and the show’s viewers.

As for his future, he took a vow to “pledge my life and honor to the Night’s Watch.” And now having died, his contract is up. This may not be so much an oath-breaking as a shrewd, close-read of his oath — a lawyerly nitpick that would make Sam Tarly proud. “My watch is ended,” he says, storming off into the winter. We can turn our back on the past, but it will still follow us.

Missing in action this week: Theon and the Ironborn, Brienne and Sansa, Mormont and Daario, presumably all off on their respective quests. Osha and Rickon are back in play, but it’s hard to imagine the little lord of Winterfell is going to be alive much longer, considering Ramsey has no earthly reason not to kill him— and certainly has no qualms about it. And are we on the brink of finally getting confirmation about the parentage of Jon Snow?