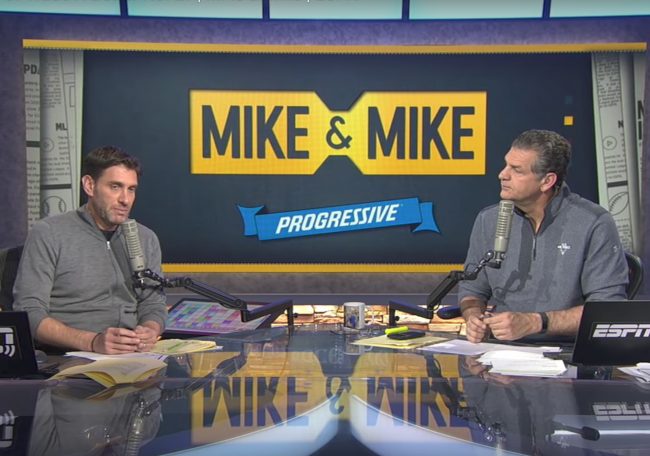 After months of speculation, it is finally official: Mike & Mike will soon be no more.

Mike Greenberg and Mike Golic, the sports talk duo that comprise ESPN Radio’s Mike & Mike, are breaking up after 18 years together.

The news became official today at the network’s upfront presentation. But a Sports Illustrated report first broke the news of the move in January. The duo spent months ignoring the rumors, and allowed speculation to continue as they continued to do their show.

Greenberg will host a new morning show to be shot in Manhattan and air daily from 7:00-10:00 am on ESPN. Golic remains on the radio show, and will be teamed with Trey Wingo. Golic’s son, Mike Golic Jr., will also join the show for the 6:00-7:00 am hour each day.

“One of the many benefits of working at ESPN is that change and evolution are in our DNA,” said Greenberg said in a press release. “My run with Golic has been an incredible experience that I’ll always treasure, but having the chance to engage multiple voices every morning in a dialogue on each day’s sports stories will be a great new challenge.”

No specific end date has been given for Mike & Mike, but Greenberg’s show is slated to start on January 1, 2018.

The sports radio landscape is set to undergo a dramatic transformation in the next year. In addition to the end of Mike & Mike, sports radio icon Mike Francesa — arguably the pioneer of the sports talk genre — is set to leave his New York radio show after 30 years  this December.