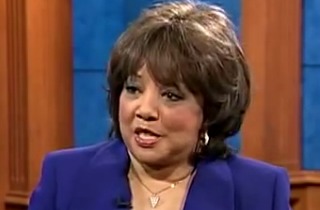 When Barbara Walters left The View last week, she was flanked by dozens of newswomen to signify her importance to the rise of women in the American newsroom. But one former ABC anchor complained on Facebook over the weekend that she was not included in the wide array of women from across all the big networks to pay their respects to Walters’ legacy.

Carole Simpson worked at both ABC News and NBC News, and became the first woman of color to both anchor a nightly network newscast and moderate a presidential debate (she was the last woman ever to do so for twenty years; Candy Crowley moderated one of the Obama-Romney debates in 2012). Simpson considers Walters to be a personal idol, and so was crushed that she wasn’t invited to be part of the sendoff.

In a Facebook post, Simpson suggests it was done because ABC News doesn’t want anything to do with her anymore.

I wonder why I wasn’t included among the two dozen network newswomen and anchors who feted Barbara Walters at a private party and then on “The View?” We both worked at NBC and ABC at the same times. She is my idol and I believe she knows that. At first I was very sad and now I am very mad. I guess ABC News, after my 24 years there, still considers me persona non grata. The black woman anchor, who had to speak her mind for herself and others, is erased from ABC history. I will say a solo goodbye to Barbara and ABC news can just…