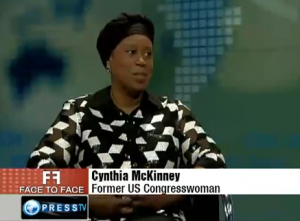 In an interview with PressTV of Iran, former Congresswoman Cynthia McKinney said the Tea Party movement “was definitely hijacked.” McKinney, making her first visit to Iran to attend an anti-terrorism seminar, told her interviewer that there was “tremendous pressure inside the political process to make sure that the voters stay aligned inside either the Democratic or the Republican parties, because both of those parties have been captured by special interests.”

McKinney suggested the Tea Party was an example of a grassroots movement “hijacked” and then “corralled back into the Republican Party fold so that these could then stay where the powers that be would like them to be.” McKinney said Sarah Palin was a key part of that effort:

The people of the Tea Party were originally angry about the direction of their country. And who would not be angry at the direction that the United States has taken now? They initially said that they would vote neither Democrat nor Republican; that they were independent voters. And then what happened? The powers that be sent Sarah Palin in, and corralled this group of independent voters, and captured them again for the Republican party.

McKinney also told PressTV that as a member of Congress from Georgia, the most powerful special interest she faced was the “pro Israel lobby.” McKinney said her support of Palestine has left her “with a target on my forehead and that then means that every means that is available to the pro Israeli lobby would be utilized to make sure that I do not ever occupy a position of authority.”

Watch the interview here, from PressTV: