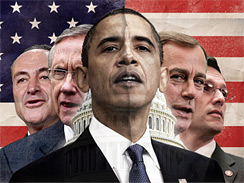 In an article about the impact of the midterm elections on legislative progress, CBS News included a photo that is drawing fire from right-of-center media like Newsbusters, calling it “racist.” The photo depicts the legislative divide with a photoshopped image that bisects the President’s face, with a darker skin tone on the left and a lighter one on the right, flanked by corresponding Congressional leaders.

While it’s hard to imagine that the photo, attributed to the Associated Press and CBS, escaped the notice of any number of editors, it is equally bemusing to contemplate where Newsbusters places its outrage. After the jump, exclusive reaction from CBS.

The obvious explanation for this photo, other than that it’s a tribute to Frank Gorshin and Star Trek, is that it is meant to illustrate the shift in the balance of power in Congress (with Democratic Senators to the President’s left, GOP House members to his right), and that the racial subtext was inadvertent. If so, the photo’s creators and subsequent editors suffer from a tone-deafness to rival Jon Stewart.

However, Newsbusters explains that the real outrage here is not the manipulation of the President’s skin tone, but this:

Are CBS and AP not so subtly implying the GOP are all white?

So, when they reference a “racist picture of Obama” in their headline, they mean it is racist against whites.

We reached out to CBS, and a CBSNews.com spokesman told us, “Our intention with the “ripped paper” overlay effect down the middle was to convey a divided Congress and nothing more.”

Misplaced outrage aside, Newsbusters’ interpretation certainly jibes with popular conceptions of the two parties, and seems to reinforce stereotypes about both sides. However unintentional the subtext, this is an elegant coincidence.

Lost in all of this is the fact that the photo also diminishes the tangerine hue of presumptive House Speaker John Boehner. Is CBS prejudiced against badly-tanned people?

While it is fair to point out the photo’s underpinnings, as many conservative blogs did, it is telling that, in their zeal to paint CBS in an unfavorable light, none of them bothered to contact the network for their side of the story.