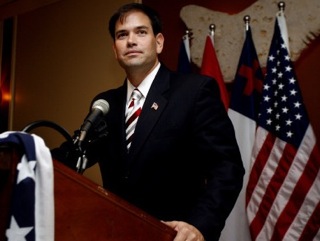 The Washington Post is having an identity crisis. It isn’t their identity that is at play– it’s Sen. Marco Rubio‘s, one they challenged because the Senator misstated the exact date of his parents’ exodus from Cuba. Those few years, they contend, turn the exodus into an emigration, and their trauma into fraud. Sen. Rubio responded in kind, writing in a column in Politico that it was “an insult to the sacrifices my parents made.” He’s wrong– his parents aren’t the ones the Post has insulted, but the parents of all million or so Cuban-American exiles, and the intelligence of its readers.

The author of the piece, Manuel Roig-Franzia, notes that the Rubios not only arrived in America in 1956, but that the Senator’s mother returned to Cuba for “at least four short trips” post-1959, the longest being “a month-long stay in February and March 1961.” The smoking gun are the Senator’s parents’ passports, which the Washington Post obtained. His parents weren’t gusanos (“maggots”, the Revolution’s term of art for exiles) because their departure preceded the Revolution, and to claim so would cause strife for Sen. Rubio in the Cuban-American community. Its principal assumption—that Cuba was a free and capitalist society where decent families could live in peace before midnight on New Year’s Eve, 1959– is woefully myopic at best, and maliciously disingenuous at worst.

While the article declares its objective to be to highlight how a politician bent the truth to be a more endearing candidate to the America right, Roig-Franzia gives away his true point in one sentence towards the top of his piece:

The real story of his parents’ migration appears to be a more conventional immigrant narrative, a couple who came to the United States seeking a better life. In the year they arrived in Florida, the future Marxist dictator was in Mexico plotting a quixotic return to Cuba.

In case that line didn’t make the purpose of the piece clear enough, below is Roig-Franzia’s appearance on MSNBC’s Hardball last night, where he argued the Senator’s family only came to America “looking for economic improvement” (Chris Matthews’ claiming Sen. Rubio was “bragging” about his parents’ trauma in a “ruse to make him look like a real anti-commie” deserves dishonorable mention):

Senator Rubio isn’t an exile, Roig-Franzia argues– he is a Hispanic immigrant no different than, say, the twelve million illegal aliens Sen. Rubio contends should not be allowed to cut in line to get into this country. This is clear because, during the time of their departure, Castro was floundering around Mexico on a glorified raft called the Granma with a couple of Marxist hatemonger pals, a threat to no one. This is simply historical fiction.

Fidel Castro first rose to national fame in 1953, after being part of an ambush massacre of Cuban soldiers in the Moncada barracks. The 26th of July is still the most exalted of holidays in Communist Cuba, and his closing arguments as his own attorney after being arrested, now known as the “history will absolve me speech,” made him somewhat of a national celebrity. He was sentenced to 15 years in prison along with several other revolutionaries, who were then freed by Fulgencio Batista in 1955. They fled to Mexico.

In the interim, Castro’s revolution was not the only show in town. The Revolutionary Directorate, a group of college students led by José Antonio Echeverría, attempted to assassinate Batista in March 1957, reaching the second floor of the presidential palace before being shot and killed, and before reaching Batista. Meanwhile, a burgeoning 26th of July movement was being led by revolutionary Frank País, who had taken the mantle in Santiago (the biggest city on the eastern tip of the island) in 1955 while Castro and friends were taking cover in Mexico, and, later, living in the low-populated mountainous region of the island. He too was shot and killed in 1957, just in time for Castro’s now-infamous glowing profile in the New York Times. It would take another two years of armed struggled for Castro to assume power.

Roig-Franzia would have us believe that Cuba’s political climate was hospitable for the average family at the time, and that the Rubios had no way of knowing in 1956 that their country as they knew it was gone forever.

Next Page: Sen. Rubio has not let the story slide.