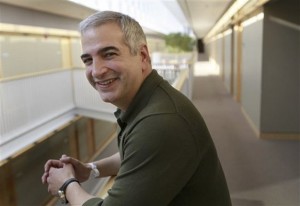 On Thursday, news broke that Anthony Shadid, a Pulitzer Prize-winning foreign correspondent for The New York Times, died while on assignment in Syria. The cause appeared to be an asthma attack. Shadid, 43, had been with The Times since 2009, but had spent most of his career covering the Middle East. He had also been a reporter for The Associated Press, The Boston Globe and The Washington Post.

Shadid was an esteemed and beloved journalist, and this was immediately evident in the overwhelming response to his death from his readers and fellow journalists. By many, he is being hailed as “the best of our generation.” Here’s a glimpse at what Shadid’s media colleagues are saying.

Rarely does a journalist die and the world is different, but without shadid we will know less, and settle for less nuanced, less human truth

Shadid was the most elegant example of how you can be an Arab and a journalist in American media without the whiff of pander or bias.

The beauty of Shadid’s journalism is that it felt simple and easy to emulate. Except when you actually tried to emulate it.

Jay Rosen, a journalism professor at New York University, admired the nobility of his work:

These people…. They put their lives on the line so that we may know. Is there anything nobler? Soldiers may equal them. But that is all.

Hala Gorani, anchor at CNN’s International Desk, observed the impact of Shadid’s death and how it’s affected the news cycle:

Anthony Shadid’s death robs us of a unique voice. Read his books if you want to know about life/humanity of Mid East bit.ly/x3zm5F

Stacey Singer, a health reporter for The Palm Beach Post, was a college friend of Shadid’s:

I’m grieving for Anthony Shadid, a college friend. We’d both get As on papers, only the professor would read his out loud to the class.

Ethan Klapper, an online editor at the National Journal, shared a small anecdote:

Remember interning at WaPo when Shadid won Pulitzer in 2010. He was home in Boston with a newborn and editors piped him in on speakerphone.

NEXT>>>> Watch an interview with Shadid’s father