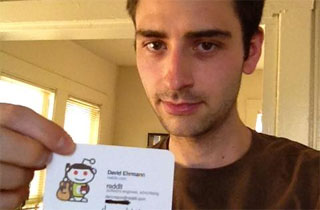 A former Reddit employee broke the single most important rule about having a job, and broke it in the dumbest way possible: he created a thread on Reddit complaining about being laid off from Reddit, spilling company secrets along the way. If you’re thinking, “Wow, what’s the likelihood of his former employer finding out about this?”, you probably haven’t been on the internet very long.

Former Reddit admin David Ehrmann opened an AMA (Ask Me Anything) entitled “I am a former Reddit employee,” and claimed, among other things, he’d been laid off for no official reason. “The best theory I have is that, two weeks earlier, I raised concerns about donating 10% of ad revenue to charity,” he theorized. “Some management likes getting feedback, some doesn’t.”

The reason I had concerns was that this was revenue, not income. That means you need ~10% margins to break even. This can be hard to do; Yahoo and Twitter don’t. Salesforce does something similar, but it’s more all-around, and in a way that promotes the product without risking the company’s financials.

It didn’t take long until Reddit’s CEO Yishan Wong replied to his comments, in a bid to to clear the air:

You were fired for the following reasons:

1. Incompetence and not getting much work done.
2. Inappropriate or irrelevant comments/questions when interviewing candidates
3. Making incorrect comments in public about reddit’s systems that you had very little knowledge of, even after having these errors pointed out by your peers and manager.
4. Not taking feedback from your manager or other engineers about any of these when given to you, continuing to do #2 until we removed you from interviewing, and never improving at #1.

Criticizing any decision about this program (link provided for people who aren’t familiar with the program and its reasons) had nothing to do with it. Feedback and criticism, even troublemaking, are things that we actively tolerate (encourage, even) – but above all you need to get your work done, and you did not even come close to doing that.

Wong also noted that by mouthing off on Reddit, Ehrmann had broken his non-disparagement agreement via his “irresponsibly unfounded speculation,” and as a consequence, Reddit could tell potential employers that he’d been fired for incompetence.

Actually, at this point, Reddit doesn’t need to tell people that. This thread is enough.