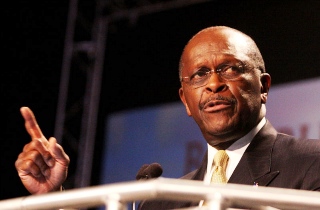 On Monday he debuted “The Herman Cain Channel,” which comes just two months after the launch of “The Sarah Palin Channel,” and more than a year after the failure of Cain’s first web TV venture, “Cain TV.”

In a blog post, Cain says he’ll be charging $9.99 per month to subscribe to The Herman Cain Channel, a deliberate reference to his famous “9-9-9” tax plan, which he touted when running for president in 2012.

“You know me. You know how I like to express myself,” Cain says in the post. “You know I like to have fun in doing so. You know how I feel about this country, its problems and the solutions that are needed. Much of the political class finds this approach ‘odd’ because it’s not how they do things. But with this model, you and I don’t need them! We can have our own channel, just between us, and we can have a great time with it.”

Cain, whose presidential bid fell apart following a series of sexual harassment claims, also promises subscribers access to some racy content. “Some of what goes on during commercial breaks is simply inappropriate for broadcast,” Cain writes. “It’s violates every conventional standard of propriety and would get the PC police very upset!”

Cain’s new venture is produced by Tapp-TV, the same company that produced “The Sarah Palin Channel.”