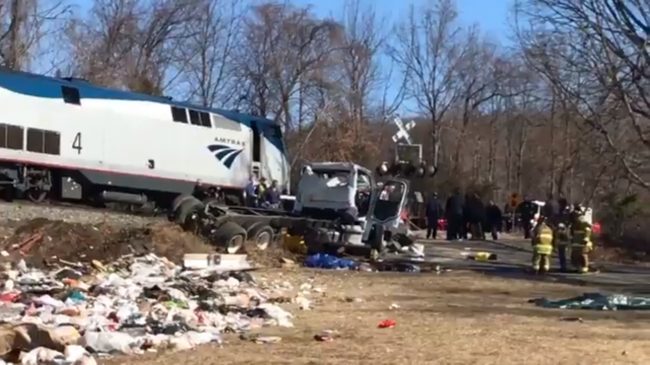 Former Bernie Sanders surrogate and occasional CNN guest Jonathan Tasini was forced to delete a tweet in which he thanked “God” the train carrying GOP lawmakers was derailed in an accident that resulted in at least one death.

Tasini’s original tweet on today’s Albemarle County, Virginia wreck — which received hundreds of replies slamming him for his opinion before he took it down — read, “Wow, btwn train full of Goopers hitting truck and this, God is working hard today to clean up the stink. Thank her. #TreyGowdy #goptrainwreck.” 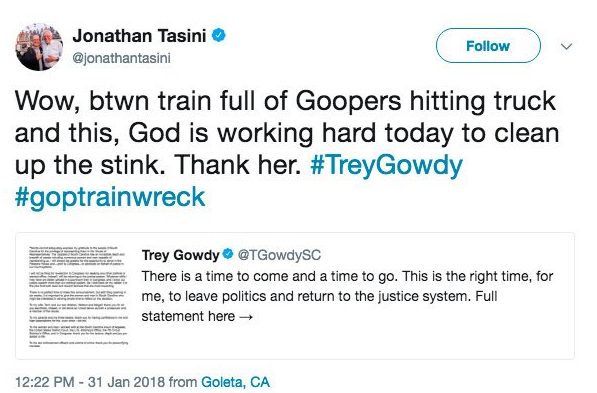 In less than an hour, he posted a follow-up to the deleted tweet and apologized: “Apologies people. It was poked out in midst of convo w 2 colleagues on the deep racism/hypocrisy/criminality promoted by GOP or as GOPer Amanda Carpenter says, gaslighting of America. Deleting.”

Apologies people. It was poked out in midst of convo w 2 colleagues on the deep racism/hypocrisy/criminality promoted by GOP or as GOPer Amanda Carpenter says, gaslighting of America . Deleting.

The crash that Tasini cheered on caused the death of at least one person and the serious injury of another. Much to Tasini’s apparent disappointment, all the Republican lawmakers and staffers reportedly remained unharmed by the accident.

Tasini went on to note that, despite calling himself a “CNN talking head” in his Twitter bio, he is not actually employed or paid by the network. “Let me save you time. I don’t work for CNN. They don’t pay me. They can’t fire me. I apologized nonetheless,” tweeted Tasini.

CNN also stated they had no actual connection to Tasini, save for a few apperances. “For those asking, @jonathantasini is not a CNN contributor or employee,” posted the network from their public relations page.

That fact didn’t stop many in the right-wing media from pouncing on CNN and falsely spreading claims that the network employees Tasini. The Daily Caller‘s Derek Hunter went on an all-out tweetstorm against CNN over the incident, claiming Jake Tapper “works with” Tasini, wrongly referring to him as a “CNN employee,” and posting another lie about the network hiring him. Additionally, Jack Posobiec — a Pizzagate truther, newlywed, and apparent fan of the dating app Bumble — said Tasini was a CNN “contributor” and suggested his comments reflected the network’s views.

However, the part about the progressive strategist stumping for Sanders was actually true, as he spoke during at least one of his presidential campaign events. The independent Vermont senator appears to have chosen Tasini as a surrogate due to his prior history of running as a progressive candidate against Hillary Clinton in the 2006 New York Senate race, per a New York Times report.