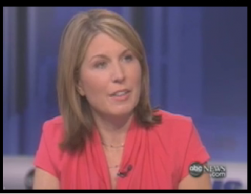 Earlier last week Sarah Palin jumped right into the NAACP Tea Party fray with a long Facebook note slamming the NAACP’s resolution calling the Tea Party racist (you might say she refudiated it).

On the This Week roundtable yesterday Nicolle Wallace, introduced to the audience as the “former Bush White House communications director,” weighed in on the NAACP’s decision. What Jake Tapper neglected to mention in his intro was that Wallace was also head of Sarah Palin‘s campaign after she was tapped by Sen John McCain to be his running mate, and received some “prime if not necessarily flattering space” in Palin’s memoir Going Rogue. In light of that rocky-ish relationship, and because Wallace has always seemed to be one of the more grounded voices coming out of the right, it was extra interesting to hear her reflect on the lack of responsible leadership in the Tea Party movement.

Any member of this powerful, promising and very relevant movement should stand up and condemn anything that you wouldn’t want to see your children participate in. And I can’t imagine there’s any parent in America who would approve of any of the racist signs that show up at any rally.

MYERS: But I agree with everything, except I think there is a role for the leaders. It’s not — why — where is Dick Armey? Where is Sarah Palin? It’s an easy thing to say exactly what you just said. And the members should do it, but so should the leaders, because, you know, there’s an op-ed piece in Politico, but most Americans don’t hear that or don’t know…

TAPPER: She just denied that there was any racism at all.

MYERS: And I think that’s — I mean, look, that’s, on its face, not true. There are elements — and they’re not the core elements, and I don’t think the movement is — is prime facie racist, but there are racist elements, and they should be repudiated. So where are the leaders? It seems like a no-brainer.

Watch the exchange below.