Fox’s Eric Bolling: Black Lives Matter Is ‘Rooted In Evil and Hate and Death and Racism’ 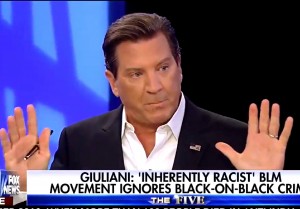 On Fox’s The Five Monday afternoon, Eric Bolling criticized Black Lives Matter for being “founded on a lie” and “rooted in evil and hate and death and racism.”

The “lie” was a reference to the widely broadcasted story of Michael Brown yelling, “Hands up, don’t shoot!” before being shot. The words became one of the rallying calls in Black Lives Matter demonstrations. The Department of Justice’s report on Ferguson was extremely critical of the city’s law enforcement and courts system, but it concluded that Brown did not say “Hands up, don’t shoot!” during his fatal encounter with the police.

“The group was founded on a lie,” Bolling said. “‘Hands up, don’t shoot’ is when Black Lives Matter was born. And then the group has gone through the iterations of ‘What do we want? Dead cops. When do we want them? We want them now’; ‘Pigs in a blanket’; and now this associated with Black Live Matter, this Dallas shooting. So a group that’s founded in a lie and rooted in evil and hate and death and racism, shouldn’t even be recognized in my opinion.”

“I disagree with Juan vehemently,” he said, referring to co-host Juan Williams, “that this is a group, maybe at its root some sort of ideology that may be admirable, but the way they’re carrying it out, their ideology is despicable.”

“Well, you’re just wrong on so many counts, I don’t know where to begin,” Williams responded.

You can view the exchange above, courtesy of Fox News.