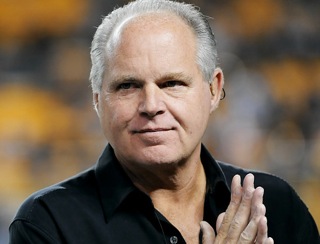 Unsurprisingly, yesterday’s Supreme Court decision on the ACA has been a fundraising bonanza for Mitt Romney. Once Republicans, conservatives, and health insurance company CEOs got done cursing the world on Twitter, they headed straight over to the GOP candidate’s homepage and began chucking cash his way (it apparently worked out pretty well for the other guy too). The NRCC sent out an email to donors trying to capitalise. This infuriated Rush Limbaugh. Sure, he doesn’t mind Republicans getting money, but he couldn’t believe the email seemed to let the Supreme Court’s Justice John Roberts off the hook.

Here’s the part of the email that set him off.

“Friend, Chief Justice John Roberts wrote yesterday, ‘It’s not our job to protect the people from the consequences of their political choices.’ He’s right. You may disagree with his decision to uphold Obamacare, but his point still stands. It’s up to us to get rid of Obamacare by defeating Obama and the House Democrats. So what are you going to do?”

Unsurprisingly, the King of No Compromise refused to listen to any talk of Roberts’ points standing. After all, the guy didn’t do what Rush wanted. Why on earth should he be spoken of kindly?

“It’s not the job of the court to protect the people from the consequences of their political choices? Really? So anything a Congress passes in any way that they pass it, the court’s gonna uphold? No matter what it is? Because it’s not their job to determine whether or not it’s American? Which is, to me, what constitutional is. Everybody is just laissez-faire here, it’s hands off. Oh, and by the way, if the way our elected officials wrote it doesn’t work, guess what? You people, whose political choices I’m talking about, guess what, I’m going to write something that none of you ever anticipated, that nobody ever made as a choice, and I’m gonna make it the law of the land. What defense do we have?

We’re now supposed to go back, throw a bunch of Democrats out of office, hope and pray the Republicans we put into office then have the guts to do the right thing. And if they do, and the whole thing ends up back at the Supreme Court someday, we know all bets are off, because nothing matters anymore. There is no standard. There is no firewall. There’s no backstop. There is no alarm. There is no 911. There’s nowhere to go.”

Listen to the clip from Limbaugh’s show below: