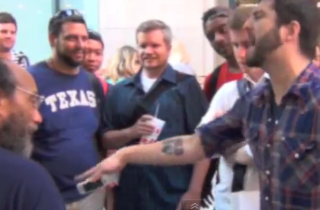 Just when we thought the Chick-fil-A meme would finally die off, a video surfaces from last week’s Chicago Chick-fil-A “Kiss-In” protest, in which a gay activist taunts an elderly black preacher and gets into a mild confrontation with him.

In the short footage, protesters are seen standing around the seated man while he preaches aloud. They shout arguments at him and laugh occasionally, while one particularly annoyed activist mocks the preacher and engages in a bit of a debate.

It is unclear what the specific theological debate was over, but the plaid-donning activist said things in a mock fire-and-brimstone voice like: “Your Bible is, in of itself, immoral…. I am tired of your hypocrisy, sir. I am tired of the hypocrisy coming out of these books.” The preacher seems to have muttered in response “then you hate God,” which prompted the activist to shout back: “I do hate God! Because the God that you worship stoned rape victims.”

The end of the video shows a chalk drawing that reads “He’s Really Gay Deep Down” with an arrow pointed directly to where the preacher was seated.

Over at The National Review, Jack Fowler linked to the video with seemingly breathless outrage:

So where are the folks who are always crying “racist,” because surely this does qualify? Watch this vile dude mock a black street preacher, in a video taken last week… As usual: Imagine if this was a conservative doing the mocking — MSNBC would be in its fifth straight day of 24-hour coverage about right-wing bigots (well, I guess it would be hard to tell the difference).

No, this does not qualify as racism. To be fair, I am not one of those “folks” who are always crying racism, so this isn’t my forte. However, it should be pretty clear that the preacher’s skin color has nothing to do with the fact that his religious views are upsetting to the gay activists protesting a chicken sandwich company for its views on homosexuality. Crying “racism” here is just petty and misses the point.

The protester’s actions are rather obnoxious, but if you’ve ever been on a college campus this should be a familiar scene: you’ve likely seen a preacher standing in the middle of the “free-speech zone” spouting off while surrounded by angry students shouting insults and antagonistic questions. In some way, it’s an invitation for controversy to go into the belly of the beast like that and read controversial passages aloud from the Bible.

The Chicago protester, identified as Spencer Thayer, responded to the criticism by saying:

The preacher was equating Gay people to pigs and Satan. He was being loud and rude while using his Bible to interupt [sic] the event with the intent of shaming peoples life styles. He has his right to free speech, just as I had every right to call him out on his bullshit. Nowhere in the Constitution does it say that ass hat Christian’s [sic] can’t be called out for being dick heads by other dick heads. […] This “preacher” was nothing but a bigot. I asked and he agreed that Deuteronomy 22:24, which states raped women who do not scream loud enough should be stone, should be followed. He also said “lazy sons” should be stoned to death as well.

While that particularly profane response does say a lot about Thayer, the content itself sounds pretty accurate. These street preachers often do say and believe in rather hardline parts of the Bible that many people find offensive or distasteful in modern society. The appropriate response is probably to walk away and ignore them.

And so it goes.