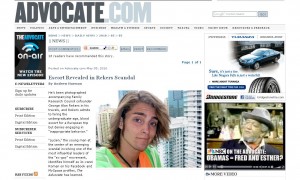 In reflecting on the news that the co-founder of the Family Rights Council had used Rentboy.com to find someone to “lift his luggage,” political satirist Lizz Winstead tweeted: “Gay prostitutes are the unsung heroes of investigative journalism.”

But as the second day story has become the identity and story of the escort who went on a ten-day European trip with George Alan Rekers, the Advocate’s decision to name Jo-vanni Roman has set off criticism that there was no need to drag the 20-year old into the story.

“It was important for the Advocate to report the story as fully as possible, especially since Rekers has spent his professional career working to prevent gay people from having rights,” the Advocate’s editor-in-chief Jon Barrett told Mediaite.

Barrett said that not disclosing Roman’s name or failing to contact him for his story would have meant that the Advocate wasn’t doing thorough journalism and not fully investigating the claims made by Rekers, who said that the escort was not paid for sex and that Rekers is not gay.

“If we hadn’t reported who this kid was, he may not have told the Miami paper what he did,” Barrett suggested. “Our goal wasn’t to exploit him, but the reality is that the escort is now a part of the story and we have an obligation to report that part of the story.”

But the decision to give his name was greeted with some hostility by commenters on the story.  One commenter, “Jon,” wrote:  “Shame on the Advocate for putting up this kid’s photo, full name, and telling what school he goes to. That could very well ruin his life–keep him from moving into another line of employment and maybe getting him kicked out of college.”

For Joe Jervis, the New York blogger who presides over the successful blog JoeMyGod, the irony of the backlash he’s received for reporting Roman’s name is that he was just reporting what the Advocate had done.

“People are feeling very protective of this kid in the community,” Jervis told Mediaite, “so there’s a sense that we need to close ranks around him.”

At his blog, Jervis said that Roman’s career decisions weren’t the issue and that he has no problem with sex workers.  Instead, the question was whether getting information about the escort and details of the services he provided helped shed light on the man Jervis says has “arguably done the most damage to gay families as anyone in the country” because of his work testifying against gay adoption.

Roman is not the first escort to feel the glare of attention after a sex scandal erupts. Ashley DuPre, the prostitute at the center of the Elliot Spitzer scandal, initially avoided the press and regretted being identified by the New York Times. While now embracing her fame by posing in Playboy and working as a New York Post sex columnist, some were critical of outing DuPre arguing she was a victim in the story.

Mike Jones—the escort at the center of the Ted Haggard affair–also found the attention rather unflattering, even thought Jones was the one who went public with the story.  In his book, he said he regrets the way he was depicted by the press as an attention-seeking hustler.

As Barrett puts it, however, the fact that Roman and other escorts caught up in sex scandals have advertised in public places with pictures, phone numbers, and names takes a bit off the allegation that their privacy was invaded. In e-mail communications with the Advocate, Barrett said Roman has used his name as past of the email address.

“We are talking about a young man who has his name and phone number on a website where he describes what he does for a living,” Barrett said

While Roman has promised to tell more about his story now that the confessions have begun, Jervis questions whether there’s really a lot more of his story that’s of interest.

“Now that we have credibly confirmation of what took place in Europe, Giovanni ends his usefulness in the story,” Jervis explained.  The attention should now be back on Rekers, Jervis concluded, where there are questions about how much money he was paid to testify on behalf of the state of Florida in opposition to gay adoption and information about Rekers’ own adoption of a child who is only a few years younger than Roman.