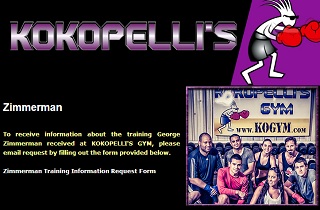 The bulk of the testimony in George Zimmerman‘s murder trial the past few days has centered on the accused murderer of Trayvon Martin‘s allegedly complete ineptitude at defending himself from the onslaught of a 158 pound teenager. On Monday, Zimmerman’s Mixed Martial Arts (MMA) trainer Adam Pollock testified that Zimmerman was “soft” when he began to train at his gym, and in over a year of training, progressed to a 1 on a scale of one to ten. On Wednesday, a defense expert in physical self defense further underscored that point, testifying that Zimmerman “didn’t seem to have any” abilities in that area.

Therefore, it might come as a surprise that Kokopelli’s Gym, where Zimmerman received MMA instruction for over a year, is promoting the George Zimmerman training program on its website, offering customers the chance to sign up now for information on Zimmerman’s training, to be delivered only after the trial is over:

To receive information about the training George Zimmerman received at KOKOPELLI’S GYM, please email request by filling out the form provided below.

* George Zimmerman training information will be provided for those who request it after the completion of the trial.

Now, there are some who would react to this news with disgust, at a seemingly crass attempt to exploit the killing of an unarmed 17 year-old. If the aim were simply to handle curiosity resulting from the trial’s publicity, the gym could have posted a statement explaining that they would not be commenting on the incident, or Zimmerman’s involvement.

However, if Adam Pollock’s testimony is to be believed, the real question is, why would anyone want to learn how they can spend a year preparing to get their ass kicked? Perhaps more importantly, why didn’t the prosecution know about this when it cross-examined Pollock? It would seem to undercut Pollock’s claim that Zimmerman was as helpless as a Pillsbury mascot that Pollock’s “no-holds-barred” gym is promoting the George Zimmerman training plan, and won’t reveal it until after the trial. It would have also been an opportunity for prosecutors to ask Pollock if George Zimmerman had given them permission to use his name on their website, and under what sort of arrangement. As of this writing, calls to Kokopelli’s for comment have not been returned.

The defense is set to wrap up soon, and while no one really knows how this case will turn out (although there is a consensus emerging that a 2nd degree murder conviction is unlikely), missed opportunities like this do not bode well for the state. 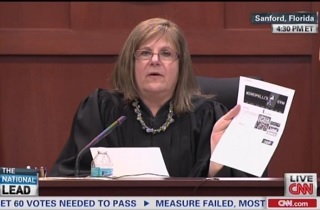 Update: Sure enough, about an hour after we published this, the prosecution recalled Mr. Pollock as a rebuttal witness, and asked him “Are you now marketing the training you gave to George Zimmerman on your website?”

Pollock answered “Absolutely not,” and tried to explain, but the defense objected. After a lengthy sidebar, the judge ruled that the question was outside the scope of rebuttal, and would not allow the question. The question would have been allowed had the prosecution asked Pollock when he originally testified.

Here’s the clip of the question, from CNN and the judge’s ruling, from Florida’s Channel 13: