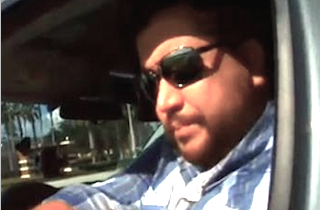 A little more than one year after George Zimmerman was acquitted in the killing of 17-year-old Trayvon Martin he has reportedly been “patrolling” outside a Florida gun shop that was recently robbed.

Zimmerman’s name popped up in a police report this weekend after he was spotted by a police officer seated in a truck parked behind Pompano Pat’s a motorcycle and firearm shop that also offers gun classes.

According to Fox News, the report reads as follows:

However, a manager at the store told Fox, “George is not being paid as a security guard by Pompano Pat’s. He and Mr. Johnson are just friends.” The pair’s friendship apparently began last summer after Zimmerman’s acquittal, when Pat Johnson publicly offered the recently-freed defendant a free gun after he found out police were not yet letting him get the gun he used to kill Martin back.

Johnson confirmed to a reporter for Orlando’s WKMG that he did not hire Zimmerman as a security guard, but rather than he has begun patrolling the area around the store “on his own accord” since the robbery occurred earlier in July.