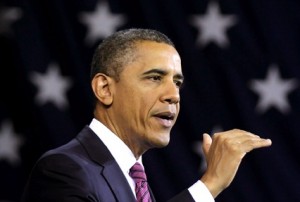 The influence of independent expenditure groups like PACs and SuperPACs has become a major factor in this year’s presidential election. Consequently, the news that President Obama has decided to encourage donations to the Priorities USA Action SuperPAC is dominating political news today, with handwringing on the left and the right about the President’s prior vocal opposition to outside groups. Philosophically, he’s just taking a page from Ronald Reagan‘s book.

The President’s reelection campaign has been raising money at a record clip, but as campaign manager Jim Messina has been warning for months, recent FEC filings show that despite a hefty advantage over his Republican rivals’ campaigns, outside Republican groups have been pouring enough cash into the race to dwarf the campaigns’ spending. Republican SuperPACs have raised north of $90 million, while Democratic outside groups have only raised $19 million.

So, despite his previous objections to the influence of outside money in elections, President Obama has decided to encourage donors to give to Priorities USA, the SuperPAC started by former White House staffers Bill Burton and Sean Sweeney, and to make certain administration and campaign officials available to speak at Priorities fundraisers.

A spokesman for the RNC was predictably quick to criticize the decision:

The Republican National Committee sharply criticized the decision. A spokesman, Joe Pounder, declared: “Yet again, Barack Obama has proven he will literally do anything to win an election, including changing positions on the type of campaign spending he called nothing short of ‘a threat to our democracy.”

There are even some Democrats who are apparently “confused” by the move, but the President’s position hasn’t changed. Believing in a level playing field doesn’t mean you’re obligated to kneel on an uneven one. Just as late President Ronald Reagan refused to unilaterally disarm the United States even though he wanted to see nuclear weapons “banished from the face of this Earth,” President Obama has decided not to unilaterally disarm in the face of an ominous nuclear fundraising arsenal, despite his desire to wipe them out.

Ironically, the success or failure of this move sets up a sort of Catch 22 for the President. According to The New York Times, some Democratic fundraisers see the SuperPAC money gap as a function of Wall Street’s anger at the President’s attempts to rein them in, which could mean that even with his blessing, the 1% might continue to shovel their cash in only one direction:

But major donors to Mr. Obama said in interviews that they were not sure the Democratic super PAC’s lackluster fund-raising was due entirely to the president’s public misgivings about outside spending. One longtime, high-dollar Democratic fund-raiser said it was also partly a result of Wall Street’s anger at Mr. Obama’s statements and policies concerning bank regulation, some of which have sent former Obama donors and fund-raisers to the Republicans.

Whether you think President Obama has done enough to rein in Wall Street, he clearly has less to offer them than the Republicans do. The only thing he can offer them is the possibility that he might win. In the past, moneyed interests had to hedge their bets a little, but with the ability to spend without limit, there’s little incentive to do so.