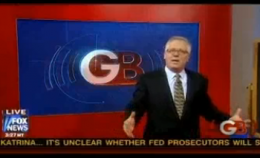 Am I the only one appalled that history is being written, and re-written right in front of us?…We can’t change our history into something it wasn’t, but it’s happening. We’ve got to grab on to the truth and cling to it, but what is the truth? Well the truth about the Civil Rights movement isn’t the Black Panthers and the threats causing Congress to pass the Civil Rights, that’s bull crap [um, yes]. God did it, by through working through people and inspiring people like Martin Luther King, and C.L. Jackson, and, yes, white people like Bobby Kennedy, and dare I say it, I’m going to set the world on fire with this…Roger Ailes.

Who Glenn Beck says spent some time with King in the Civil Rights movement. I have no idea if this is true…nothing turns up on the Google. Either way, is the subtle conclusion here that Glenn Beck is the natural extension of Civil Rights leaders because he is now being championed by Ailes? Possibly that’s a stretch (Glenn’s larger point is that violence never solves anything). In the meantime, I’m still puzzling over who concluded the Black Panthers were responsible for the Civil Rights Act. Watch below.