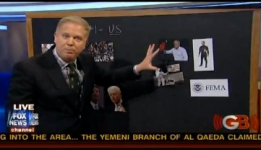 Ok. Well this should clear things up somewhat for those folks out there who are confused as to what side of the climate change debate Glenn Beck falls on. He apparently thinks it’s merely another conspiracy theory. Last week Beck got into a rather heated exchange with Rachel Maddow ostensibly over climate change. Short version: Beck denied ever saying this winter’s snow wasn’t a symptom of climate change, Maddow pointed out he had, many times.

Then yesterday, World Net Daily, the successful media operation that makes most of its money selling ‘birther’ paraphernalia, wrote a rather scathing piece on Beck “accusing” him of being a “kinder, gentler” Glenn Beck – one who believes (gasp) in global warming. (This thanks to some comments Beck made in an interview with USA Today.)

Fear not World Net Daily devotees! Glenn Beck made it fairly clear in longish segment last night that he equates global warming advocates with other conspiracy theorists such as…the Birthers, the Truthers, and the man on the mooners (I made that last one up…he was referring to the people who believe the landing on the moon was staged). Also, the reason these conspiracy theorists exist is because we are accustomed to being lied to by our politicians. Also, we suffer from a habit of only hearing what we want to. You can watch the vid below for a full explanation(ish) of his thinking.

Speaking of conspiracy theorists. One has to wonder whether after last night’s announcement that Van Jones has been tapped for this year’s NAACP’s ‘image award’ whether or not Beck will conclude that the NAACP itself is a group of secret Maoists. I’m sure we won’t have to wait too long to find out.