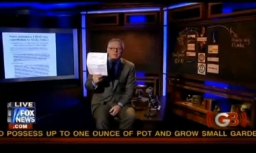 I figured it was fifty-fifty whether Glenn Beck would open his show tonight with the news that President Obama was appearing the Daily Show next week while Jon Stewart was in town for his Restoring Sanity rally, or opt for the news that George Soros donated $1million to Media Matters to essentially combat Beck. I guess not surprisingly considering yesterday’s show, and the fact Soros is currently playing the bogeyman in Beck’s world, he chose the latter.

The West Coast air must have been good for Beck because he’s been on fire all week and tonight was no exception. You’ll have to watch the clip below to get the full benefit of the voices (including some convincing baah-ing) but here’s the gist of it.

Did you miss yesterday’s show? George Soros didn’t, he’s only the richest most powerful person on the planet. What were you doing!…Now [Media Matters] has been trying to get him to give them money for six years and this is the first time, so Media Matters, let me just say this first, you’re welcome!

This was followed by the usual talk of shadowy organizations, etc. Then Beck attempted to turn the tables.

You know what’s weird? This press release is almost like a ‘wanted dead or alive’ poster, isn’t it? Gee Mr. Soros, you’re not inciting violence over there towards me? You’re not making me public enemy number one are you? I hope not Mr. Soros but I’ll make sure to track down all that all that violence.

Cue exaggerated slow camera zoom. Later Beck compared himself to Obi-Wan Kenobi, as in if you cut him down with a light saber (or a blog post?) he will rise up again. With sound effects! If only he could have been so entertaining in initial his response to Jon Stewart’s rally news. Meanwhile, the sandbox fight between Beck and Media Matters continues apace. Video below.