This Exists: 300 Pound Pet Chimp Gets Loose, Runs Amok, And Flips Off A Cop 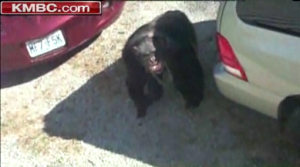 Has there ever been a good story that involved the phrase “pet chimpanzee?” It’s like Chekhov’s famously said, if you introduce a pet chimp in Act One, it will go on a dangerous rampage and cause a bunch of property damage by Act Three. That’s just what happened in Kansas City yesterday as a 21 year old, 300 pound chimpanzee named Sueko got loose and “pointed and laughed at residents and flipped off an animal control officer.”

Here’s some of the run down of what happened from the Kansas City Star:

“[The owner] told police that he left Sueko in her cage inside his truck and that she somehow escaped. But the Haley sisters wondered if Archigo tied Sueko to a tree because she was dragging a chain with two padlocks.

Once the sisters realized the chain wasn’t attached to anything, they got worried. They walked toward the closest house, but Sueko headed for the house, too.

As they backed away, the sisters called on their cell phones for help.

Residents inside the house heard a loud bang, looked outside and saw Sueko hitting their vehicles and pounding on their front door. The ape broke a gate, knocked over a small fence and climbed on a parked Camaro while laughing and pointing at the residents gathered on their roof.

The residents tried to distract the ape so the Haley sisters could escape but soon realized that Sueko easily could climb onto the roof, so they retreated.

Sueko started swatting at passing vehicles. From in the house, Tiffanie Jennings and others shouted for motorists to keep their doors and windows shut.”

And it continues like that. Sueko was eventually captured and taken to a primate sanctuary named Monkey Island which, I’m assuming, is unrelated to the awesome computer games of the 90s. Police are apparently reluctant to give Sueko back to the owner because this is at least the third incident of the monkey getting loose. I’d be reluctant to give him back because of a simple rule I have: anyone who thinks that chimpanzees would make a reasonable pet, is not smart to keep a chimpanzee as a pet.

Thanks to that rule, I have never once had my face mauled by a monkey.

Check out a video report (complete with amateur footage of the whole situation) from Kansas’ KMBC below: