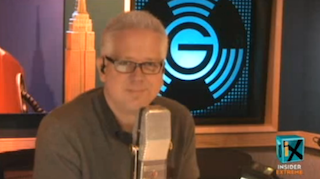 With each passing minute, it’s becoming more and more clear that the real sticking point in this story is Osama bin Laden’s body. The White House has said that the body was buried at sea “in accordance to Islamic practices.” A number of people seem to have a problem with this, either because they don’t think he deserves any respect or because they want more proof that he’s actually dead. One such person was Glenn Beck who, today on his radio show, came up with some more…creative ways to dispatch the terrorist leader.

Beck didn’t like the burial at sea for both the reasons above. For instance, he wondered why the government would add more fuel to crazy conspiracy theorist’s fire by not putting the body on display (he does have a bit of a point here although it’s most likely the people who doubt the official story would ever be satisfied). And he added another interesting argument, that “good” Muslims should actually be insulted by having a mass-murderer (literally) lumped in as one of them. Beck asked if Lutherans would be upset if Adolf Hitler didn’t get a good Lutheran burial. “Of course not!” Beck said. “He’s Adolf Hitler!”

(By the way, it is not universally agreed upon as to what Hitler’s religious was. Beck was just guessing with Lutheran.)

Beck then gave his ideas for Bin Laden disposal:

Anything that lets everyone know that no spiritual loophole is going to net the guy any afterlife virgins.

However, Beck got serious at the end, thanking the armed forces as well as President Obama.

Check out the clip from Beck’s Insider Extreme below:

(Also included at the beginning of the clip below is Beck’s critique of how the big three cable channels handled the news. His dissection of Geraldo Rivera’s joyous broadcast is especially funny.)