Glenn Beck Thinks The NYT Is Being Mean To David Paterson 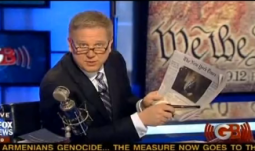 This is from last night’s Glenn Beck Show (tonight is a taped special about the indoctrination of the nation’s children…you’re on your own for that one). Last night Beck, and his pipe, took a moment to weigh in on the NYT coverage of David Paterson. The short version (and it’s admittedly pretty short for Beck) is that the New York Times, and by extension, the Democratic Machine is being overly hard on Paterson. What’s a free World Series ticket here and there! Admittedly, yes. In the larger scheme of the current state of New York politics, not the biggest deal. The witness tampering, however, is another story, and Beck is surprisingly unconcerned about either the charges, or the general level of corruption in Albany they represent, or the woman who was allegedly abused. As far as Beck is concerned, it’s all the workings of the East Coast Media Elite against a poor blind governor!

This is in stark difference to Charlie Rangel, who has been ethically challenged for years but only asked to step down yesterday (maybe Beck should listen to more Juan Williams): “Why the difference in treatment? Rangel has been in office for 40 years!” Answer: “I bet Charlie Rangel knows where all the bodies are buried.” Additionally, says Beck, the media has been playing right along with Washington’s games all these years, which is why it’s taken this long for him to be booted. Which, actually, is a reasonable point: if the NYT applied the same determination to report to everyone in Washington as they did to Paterson…well, the ranks would be thinned fairly quickly me thinks!