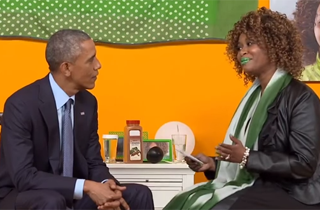 An essay from Hank Green, one of the YouTubers who interviewed President Barack Obama after the State of the Union last week, revealed an interesting fact about his interview: Google had some help in choosing the questions he asked the president.

In the essay, published on Medium, Green described the process of writing the questions he and his co-interviewers, Bethany Mota and GloZell, and noted that they were all in contact with Google during the process.

“After I sent Google my first list of questions, they got back to me pushing me to drop the soft balls,” he wrote, and included what appears to be a response from Google:

“Thanks for sending your questions — they’re great. In particular I really liked your questions on regulation, North Korea, and drugs/incarceration.”

This may not be such a big deal: Google hosted the event, the three personalities work for Google-owned property YouTube, Google wants to make sure the questions convey a sense of seriousness and purpose, etc.

But some interesting facts make this a slightly surprising revelation: 1), According to BuzzFeed, Google and the White House initially said they had no role in choosing the questions eventually asked of the president (and intervened only when there was overlap between the personalities’ questions); and 2) Green’s essay criticizes the media for not taking them seriously due to their status as YouTube personalities:

Walking around the White House, seeing the Press Briefing Room and all of the two-hundred-year-old chairs and decoy helicopters reminded me that the history of post-democratic power is really the history of legitimacy….

There is nothing actually legitimate about Fox News (or MSNBC for that matter) and young people know this. They don’t trust news organizations because news organizations have given them no reason to be trusting. These channels exist not to inform but to uphold the biases and values of particular ideologies. Ideologies and values, by the way, that very few young people embody. Even when they try to strike a balance, they do it by pitting different perspectives against each other in staged arguments. But neither perspective looks familiar to most people under the age of 40, so they just tune out.

This complete lack of objectivity and representation in cable news has degraded the legitimacy of news media as a whole.

Lack of representation of a broad spectrum of Americans? Yes, that’s a serious problem in the media. Proliferation of biases that tune out conflicting opinions at the expense of debate? We’re Mediaite, we point that out often.

But we also point out when there’s a potential corporate influence in what is supposed to be an independent, “legitimate” process, and in the case of the Obama/Google nexus, it’s a very big influence: Google employees are some of the biggest contributors to Barack Obama, and CEO Eric Schmidt is quite tight with the president.

So when Green says that Google is awesome “for making sure a diverse group of people headed to the White House for this opportunity”, then hooray for Google for promoting this quite admirable goal. And, ultimately, the interviews proved fruitful, as our own Matt Wilstein suggested.

But it’s still a massive corporation that is close to a sitting president, helping coach the questions being asked of him.