Google’s Easter Gaffe Brings Out The Stupid In Conservatives

Google’s Easter Gaffe Brings Out The Stupid In Conservatives

I have to admit, the outrage over Google’s decision to honor Cesar Chavez on Easter gave me a smile, because it coupled a legitimate PR gaffe with the kind of culture war overreaction that slow news weekends thrive on. Better than that, though, it brought out the Obama Derangement Syndrome in conservative news site The Daily Caller, who found a way to connect the whole thing to President New Black Panther, and the stupid in Michelle Malkin‘s Twitchy, who confused Cesar Chavez with recently deceased Venezuelan President Hugo Chavez (yeah, who can tell those people apart, anyway?). But best of all was the conservative reflex to praise rival search engine Bing, because… Jesus?

As a lifelong celebrator of Easter, I can understand people being miffed that Google would ignore the holiday, especially when they manage to work in tributes to every other thing under the sun, and could easily have solved this dilemma with a two-fer:

That’s not such a stretch, given the fact that Cesar Chavez co-founded the National Farm Workers Association, and the Easter egg is a symbol of fertility, right? So is the bunny, but it doesn’t fit as neatly into a Google logo. They could also have waited to fete Chavez when his birthday didn’t fall on Easter, but I like my solution just fine.

To whatever degree this is a problem, The Daily Caller found a way to blame it on NObama. From Wonkette:

But when in doubt, blame President Obama because he “released a statement in 2011 proclaiming March 31 ‘Cesar Chavez Day.’” Obviously, this was part of a two-year plan to force Google to honor some brown dude instead of Jesus. OBVIOUSLY. Just look at this air-tight argument from the keen investigative minds at The Daily Caller:

Google CEO Eric Schmidt was an informal adviser to both of President Obama’s presidential campaigns, a member of the Obama White House transition team in 2009 and a onetime prospect for an Obama Cabinet post during the president’s second term.

Do you get it now? Case closed.

Then, there’s selective outrage machine Twitchy, who initially misidentified the Chavez in question, before appending a correction. More amusingly, though, the Twitter users whom Twitchy and Buzzfeed identified as outraged over Google’s slight of God’s son expressed a preference for Bing, whose Easter page paid tribute to… our Lord and Savior Jesus H. Cadbury? 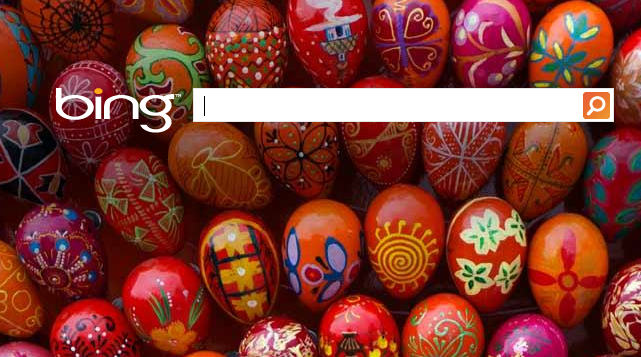 Did I miss an important semester in Sunday school? The one where they explain that Jesus was crucified in favor of furry egg thief Barabbit, then was resurrected out of a Cadbury Creme Egg three days later, his palms stained with Paas egg dye? Why do conservatives hate Jesus so much?

Google should have seen this coming, but it’s not as though Bing’s celebration was any more connected to the “reason for the season” than Google’s was. Now that they’ve offended so many, though, here’s some free advice for Google: go with this one next year.