GOP Candidate: We Should Put Landmines On Mexican Border

GOP Candidate: We Should Put Landmines On Mexican Border 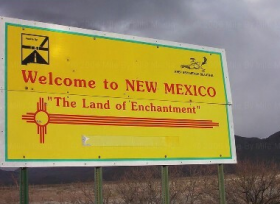 Does this mark the unofficial beginning of the long, hot, likely nutty summer ahead? Tom Mullins, the Republican nominee for a New Mexico congressional seat, told a radio show over the weekend that one way the U.S. could secure the Mexican border would be to place land mines along it. Alas, I fear this suggestion will probably less shocking to some than it might have a few months ago before the midterm election cycle kicked into high gear and Arizona passed its immigration bill. From CBS:

During the May 18 interview with KNMX radio in Las Vegas, N.M., Mullins said the U.S. could mine the border, install barbed wire and post signs directing would-be border jumpers to cross legally at designated checkpoints.

“We could put land mines along the border. I know it sounds crazy. We could put up signs in 23 different languages if necessary,” Mullins says in the radio interview, where he also expressed concern that terrorists could carry a nuclear weapon across the Mexican border.

Presumably the signs in 23 different languages are for unsuspecting tourists. Yesterday, Mullins clarified that he was not “advocating” the U.S. actually do that! Merely that he had heard it while campaigning and it could be a possible solution to the immigration problem. All of which begs the question: how long till some enterprising TV exec turns someone’s political campaign into a reality television show? I think it’s safe to say we’re at the point where the two would dovetail nicely.