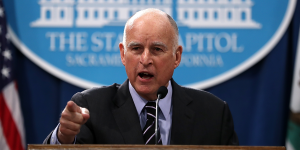 As more and more Democratic party leaders come forward conflating tolerance with support for and acceptance of intolerance — or, in other words, welcome abortion foes to the Democratic party, California Gov. Jerry Brown has disappointingly joined their ranks.

In a Sunday interview with Chuck Todd on Meet the Press, Brown spewed out the typical narrative that west coast, “liberal elites” are actually the intolerant ones — you know, by having the audacity to demand that the elected representatives of a party claiming to stand for equality for all must support human rights.

It was disheartening to hear Brown betray his own base, portray us as out-of-touch and overzealous for our beliefs that women are not bargaining chips, and bodily autonomy isn’t only a human right but a serious issue of public health. Reproductive rights are a core value of many California Democrats — the majority of us want to see them expanded and protected, not rolled back.

“The fact that someone believes today what most people believed 50 years ago should not be the basis for their exclusion,” Brown said. “[The] litmus test should be intelligence, caring about, as Harry Truman or Roosevelt used to call it, the common man.”

He continued: “And I’m sorry, but running in San Francisco is not like running in Tulare County or Modoc, California, much less Mobile, Alabama,” reiterating Democratic Congressional Campaign Committee Ben Ray Lujánd’s suggestion in an interview with The Hill last week that candidates should “fit the district” rather than a rigid, coastal elitist ideology.

Apparently we’ve reached a point in our national politics wherein suggesting that women are human beings and their rights come before those of embryos and fetuses is an “elitist” view — and that’s coming from the mouth of California’s governor.

But the bigger issue in this reference to other regions in America is that Brown fails to consider how these areas are among the most difficult places to seek an abortion, and as a result, some of the most dangerous places in not only the country but the world to be a woman.

Texas, with its host of barriers to abortion access as well as contraception and family planning resources, has the highest maternal mortality rates in the United States, which boasts the highest maternal mortality rates in the industrialized worlds. In seven states, there is one abortion clinic remaining. Women are going bankrupt or worse yet, for those who can’t afford the increasing costs to travel, have an ultrasound, and have the procedure, are putting themselves in severe danger in attempted DIY abortions.

“In America, we’re not ideological, we’re not like a Marxist party in 1910,” Brown said.

“If we want to be a governing party of a very diverse — and I say diverse ideologically as well as ethnically — country, well, then you have to have a party that rises above the more particular issues to the generic, the general issue of making America great.”

The problem with this last soundbite by Brown is that reproductive rights aren’t some niche, “particular” issue. They affect women’s ability to access education, employment opportunities, earn fair wages; they distinguish the United States from countries around the world where the state practices reproductive coercion and women are mauled or killed because of this. This isn’t liberals being “holier-than-thou,” “social justice warriors” — this is about liberals fighting for human rights and respect for women.

None of this is to say that Jerry Brown isn’t a good man with a good record on progressive issues. Because he is. That’s exactly why, of all the Democrats and progressives who have come forward to welcome abortion opponents with open arms, from Nancy Pelosi to Tom Perez to Bernie Sanders, I hope Brown rethinks and amends his statement.