Hamilton Creator: In This Election, We’re Having the Same Issues They Had in 1800

Hamilton Creator: In This Election, We’re Having the Same Issues They Had in 1800 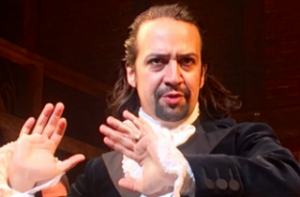 Lin-Manuel Miranda is living large right now. His Broadway show, Hamilton, is a runaway hit and everyone loves it. Since he’s so popular, he even got to give a commencement speech lately, which saw him bash certain right-win politicians’ beliefs.

He has plenty more to say on the subject of politics, too, which we should expect from a man who wrote a musical about Alexander Hamilton and Aaron Burr. In a recent interview with Rolling Stone, he spoke at length about the parallels between the events of 1800 and the current election, although he did insist that he’s been so busy with the show that he hasn’t had much time to keep up with the minutiae of the current issues.

For instance, he commented on how Hamilton’s fears regarding the future of the country are basically Donald Trump‘s platform now. He said this:

I can tell you that Trump’s politics about building a wall, that’s old. And it’s such a malignant form of a very common American electoral disease, which is, “Point at the newest people here and say they’re the reason you’re broke.” That’s as old as time itself. That’s “Irish Need Not Apply.” That’s [Pat]Buchanan in the Nineties. And it’s finding purchase with Trump right now.

Also interesting is this particular passage:

Read the whole thing over at Rolling Stone‘s website now.