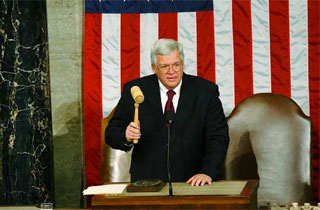 Earlier today, we mentioned the possibility that former Republican House Speaker Dennis Hastert‘s indictment stemmed from his attempt to cover up past misconduct by paying someone $3.5 million to stay quiet. According to a federal law enforcement official speaking to the LA Times, we (and anyone with a pair of working eyeballs) were right: “It was sex.”

A federal official speaking anonymously to the Times confirmed that “Individual A,” who received roughly $1.7 million in cash payments from Hastert beginning in 2010, was a man from Yorkville, Ill., and that the “prior misconduct” mentioned in the indictment happened while Hastert was a wrestling coach at a local high school, prior to 1981 and before Hastert’s career in politics began. The sources confirmed that the misconduct involved sexual abuse. (In a statement provided to BuzzFeed, the Yorkville School District said that it “has no knowledge of Mr. Hastert’s alleged misconduct” and offered to cooperate in any investigation.)

Whatever the details, it was enough for Hastert to attempt to pay him off, and in the process, broke banking laws by structuring multiple cash withdrawals in amounts small enough to avoid being reported to the IRS. (He was also charged with lying to the FBI after he claimed the withdrawals were for his own use.) Hastert was indicted this Thursday and, if convicted, faces up to 10 years in prison and $500,000 in fines.

While these are the only charges the government is pursuing against Hastert, sources told BuzzFeed that they’d considered including a second individual (“Individual B”) in the indictment, and that they were “one of potentially several alleged victims of ‘prior misdeeds.'”

(Side note: This conspiracy theorist seems to have predicted the alleged high school story years ago.)