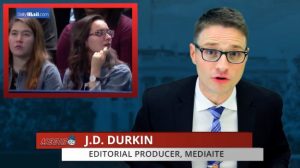 As the country continues to come to terms with the fact that Republican nominee Donald Trump shocked the world this week to become President-elect of the United States, there are — in my opinion — some hard truths that Democrats in this country must face.

First of all, despite reports that the Clinton camp is looking elsewhere to put the blame for their catastrophic and unexpectedly disastrous loss, the fault lies with their own candidate. The former Secretary of State is terribly unelectable; in 2008, the then-New York Senator lost a party nomination that was all but hers to win. During this year’s primary, she nearly lost to a 74-year-old socialist with zero national name recognition, and on Tuesday night she lost again to a TV celebrity she long called, “temperamentally unfit and totally unqualified.”

Not quite enough, apparently.

At this crucial moment in time — with the Democrats still dazed from a 12th round TKO that has left them with neither the White House nor the Senate — their constituents must realize it is the party that has let them down. The party, after all, propped up the only person who could lose to Donald Trump, and the hubris demonstrated by the Clinton camp at every turn spelled their own self-inflicted sabotage.

This isn’t Jim Comey‘s fault, or the fault of Julian Assange and WikiLeaks. The fault doesn’t lie with Russia or the mainstream media who gave Trump wall-to-wall coverage, or even third party candidates and their newly-renewed Nader Effect debate. The Democratic party let Democratic voters down.

My latest segment on the issue — and others — is above, via Mediaite Originals.
—
J.D. Durkin (@jiveDurkey) is an editorial producer and columnist at Mediaite.