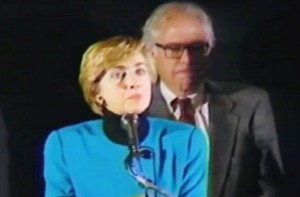 As the Democratic presidential primary race winds down, much has been made over the “harm” that independent Vermont Senator and current Democratic runner-up Bernie Sanders is inflicting on likely Democratic nominee Hillary Clinton‘s chances at defeating Republican nominee Donald Trump. Sanders and his campaign have waved away such concerns, sometimes in questionable ways, but recent polling indicates that the specific attacks that Sanders has pressed on Secretary Clinton have had an impact.

Whether Hillary Clinton deserves the political damage she has taken from Sanders is a matter of opinion, but a look inside the most recent NBC News/Wall Street Journal poll shows that as a matter of fact, Sanders’ attacks have hurt her against Trump. Luckily, most of Sanders’ attacks, with the exception of his relentless demand for transcripts of her paid Goldman Sachs speeches, are conveniently contained in one place:

Secretary Clinton appears to be getting a little bit nervous. And she has been saying lately that she thinks that I am quote unquote not qualified to be president. Well, let me, let me just say in response to Secretary Clinton: I don’t believe that she is qualified, if she is, through her super PAC, taking tens of millions of dollars in special interest funds.

To be clear, Hillary Clinton not only didn’t say Sanders was “not qualified to be president,” she actually refused to do so three times in succession. But those are the main attacks that Bernie Sanders has been pressing for months.

That new poll shows that Donald Trump, whose trade policies are clearly insane and who has openly promised to dismantle Wall Street reform, is now more trusted on those issues than Hillary Clinton:

Trump also scored better than Hillary on “Dealing with the economy” and “Standing up for America,” whatever that means, but clobbered Trump on “Making appointments to the Supreme Court” (Trump 34 Clinton 47), “Being a good commander-in-chief” (Trump 33 Clinton 43), “Looking out for the middle class” (Trump 30 Clinton 43), “Handling foreign policy” (Trump 29 Clinton 56), “Having the ability to unite the country” (Trump 26 Clinton 36), and “Dealing with issues of concern to women” (Trump 16 Clinton 63).

There is an argument to be made, which I have made, that Hillary Clinton could have avoided some of this by simply putting out those Wall Street transcripts back in January, but that wouldn’t have stopped Sanders from pressing these attacks. There’s also a debate to be had over the legitimacy of these attacks, which aren’t always backed up by the facts. Asked to provide an example in which large speaking fees or campaign contributions had resulted in a change of position from Hillary, Sanders could not provide even one.

His attacks on trade have been based either on things her husband did, or actions she took as Secretary of State, when it was her job to negotiate the most favorable trade deal she could. Her eventual opposition to the Trans-Pacific Partnership is easy to cast as political convenience, but the fact is that it’s absurd to expect that then-Secretary of State Hillary Clinton would have done anything but try and promote the agreement that was her job to negotiate.

This poll doesn’t all land at Bernie Sanders’ feet, either. The media has played a huge part in eroding Hillary’s overall support, and large numbers of idiot voters do, too. But Sanders can’t claim he isn’t hurting Hillary against Trump.