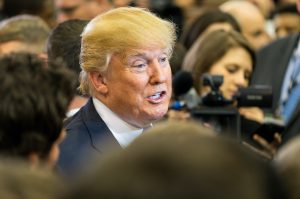 Everyone loves a winner. Most of us intrinsically understand and accept this as a fundamental human truth. And yet, through the course of this strangest of years, it has still been rather jarring to see so many respected conservatives pretend that liberal conman Donald Trump is remotely one of us, or even modestly qualified to be president of the United States.

This phenomenon first began when Trump appeared certain to win the GOP nomination, accelerated once that was official, and has now exploded after his shocking victory over a highly unpopular opponent who got at least two million more votes than he did. Even ardent Trump critics like Ted Cruz, Marco Rubio, Mitt Romney, Paul Ryan, and Nikki Haley, among others, have now turned into basically full-fledged supporters of a guy they all know to be a fraud who shares few, if any, of their previously pronounced principles.

Each of them has slightly different motivations and it is quite possible that they are simply playing a public game in order to navigate their own perilous political waters and/or doing what they think is in the best interest of their party/country. However, the idea that moderate Ohio Governor John Kasich would end up being about the only major Republican to not sell out his principles for short-term political expediency is almost as big a surprise as Trump’s win itself.

Last night in Iowa, Trump actually mocked what is left of the “Never Trump” movement, saying it was on a “respirator.” He might have been being unusually generous in his description of his antagonists.

As I wrote early and often in this cycle, the “conservative” media was far quicker than the political class to abandon everything they claimed to believe in so that they could feed from the ratings trough of “Trumpsanity.” The order of this conservative betrayal was fairly easy to understand because politicians go where the votes are, while media personalities gravitate to where the audience is. Politicians only respect numbers large enough to win (in Trump’s case, barely more than 46%), while in this era of unprecedentedly fragmented era, media members get basically orgasmic over capturing 5-10% of the adult population.

So the vast majority of the “conservative” media was already riding the Trump Train before his general election miracle. Now, having dodged the bullet of having helped maybe the only candidate Hillary Clinton could have beaten get the nomination, even most of the relatively token “conservative” media opposition to Trump has been washed away by the tidal wave of his coming presidency (for instance, Joe Scarborough, who has held literally every position regarding Trump humanly possible, now seems to be effectively part of his transition team). Ironically/tellingly, only early Trump sycophants Ann Coulter and Sarah Palin have shown any buyer’s remorse and gone gently in the other direction as they begin see that they (surprise!) may have been used/conned by this fake billionaire.

While there are still a few stubborn stragglers like me who condemn Trump regularly, we are fast becoming seen as being much like those stray Japanese soldiers who never accepted the surrender which ended World War II. So I figured there might be some value in trying to explain why it is that I for one have not joined the ranks of the “winners.”

First, let me acknowledge that I fully understand the confusion. Why in the world would a conservative in the media openly oppose Trump when he has saved the country from Hillary Clinton and seems poised to “Make America Great Again”? Heck, multiple polls out just this week show that a solid ¾ of Republicans now suddenly hold formerly liberal positions on the role of government with regard to business and trade, simply because they appear to be Trump’s opinions as well. Trump’s popularity, while still historically low for a president-elect, has never been higher among conservatives, or the general population.

In short, trying to sell anti-Trumpism to “conservatives” is currently about as viable as peddling beef to vegans. No one wants to even hear what you have to say because it literally makes them feel queasy.

In an era when popularity drives EVERYTHING in the news media (What’s trending? How many retweets? How many likes? How many shares? How were the overnight ratings?), it seems impossible that someone would take a position they know will make them unpopular within their own “tribe.” Therefore it is presumed that they either must be not thinking straight, or they have an ulterior motive.

As a marginal “media member” (though my weekly national radio, this column, and my social media platforms) I have always be frustrated by the understandable reality that most people in my business are rightly perceived as having an “angle.” Because of this, it is usually presumed that we ALL must have an “angle,” even when it isn’t overtly obvious what it might be. In fact, often times if you take a particularly unpopular position it is seen somehow as proof that there MUST be a hidden agenda somewhere because no one in the media would knowingly do something against their own self-interest.

Think about that for a moment. This perfectly warranted cynicism of the media runs so deep now that when someone takes the rare principled stand against self-interest, it is presumed that there must be a “catch” somewhere. In effect, this means that it is literally impossible to take a productive stand on principle because very few people will accept that this is what you are really doing (my first experience with people not “getting” this was when I broke off my alliance with Sarah Palin because I, correctly, perceived that she was planning to sabotage the cause of beating President Obama in 2012).

With me, there is clearly no financial or career motive here. My radio show will likely be going away, or at least ending its broadcast component, largely because my position on Trump cripples the show’s ability to grow or remain economically viable. My career as a conservative documentary filmmaker is also now surely shelved at least until Trump is out of office, partly because Fox News Channel will never book me again. Meanwhile, most of the shows at MSNBC or CNN are understandably scared of me thanks to my days as a “Palin Defender.”

Some people seem to think that I haven’t shifted my position on Trump (actually, having seen him in action as president-elect, while there are some things I like and I am still hoping for the best, may have made me even more anti-Trump) after his victory for psychological reasons. According to my detractors, I don’t want to admit that I was wrong about Trump and I am hoping to be able to say “I told you so.”

While I have plenty of personality flaws, and am stubborn enough to stick to a position I believe in for a very long time with a very limited reward, this is not an accurate perception. I know this, mainly, because it is my belief that, with any luck at all, it is going to be a VERY long time before there will ever be the chance for a true “I told you so” on Trump. I am confident that by then I will be either gone from the public scene, or that it will too far removed for anyone to remember or give a damn what a minor figure like me warned, in vain, about Trump.

So what is my motivation? Simply to tell the truth about someone whom I believe, when history is finally written, will be seen as the man who ended conservatism as a real force in this country and who fundamentally altered, for the worse, our very system of governance.

While there are plenty of short-term elements regarding Trump which worry me, I actually think he’s likely to do some very good things and might be rather popular for a while. It is in the longer-term where I am most confident Trump will cause real damage. I see his election as the moment our politics officially left the gravitational pull of the rational Earth forever, and therefore there is no rational way to predict where, now that we are completely untethered to logic or truth, this will eventually lead us.

I just know that it will be bad. Probably very bad. And that someone who is not a liberal should be screaming as loud as they can about what is happening, regardless of the consequences. Maybe because I have less left to lose than most in this business, I am one of those still willing to do so. Regardless, while I still hope that I will be wrong about Trump, I can assure you that I’m 100% sincere.