As the presidential candidates slug it out onstage, has Hillary Clinton already won the digital advertising battle? Hillary started advertising earlier. She also is running more broadly and is punching harder — even going as far as comparing Trump to Putin and a KKK grand wizard.

Hillary’s confidence that she would become the official Democratic nominee was clear months before Bernie dropped out. Her strategy switched, shifting from a softer, pro-Hillary message ‘Join the official Clinton campaign’ in the primaries, to aggressive anti-Trump ads: ‘Make sure Trump never becomes president’. Her ad creative firmly conveyed anti-Trump sentiment. Hillary’s negative ads launched in December 2015, when Trump’s ratings were at their height of 43%, according to RealClear Politics’ polling data.

MediaRadar found that anti-Trump ads from various groups surged in February and March across 96 websites, and remained strong through August. The campaigns have included a mix of native, video, and display ads. The sheer breadth of the ads purchased also indicates programmatic ad buying aimed at a wider audience.

As the general election plays out, MediaRadar will continue to track the scale of attack ads. MediaRadar tracks advertising insights and analytics for over 2.6 million brands, including digital ads and TV in real-time. As the leading ad sales intelligence tool for media companies, MediaRadar places a strong focus on cross-platform selling and innovative ad formats including native, mobile, video and programmatic. 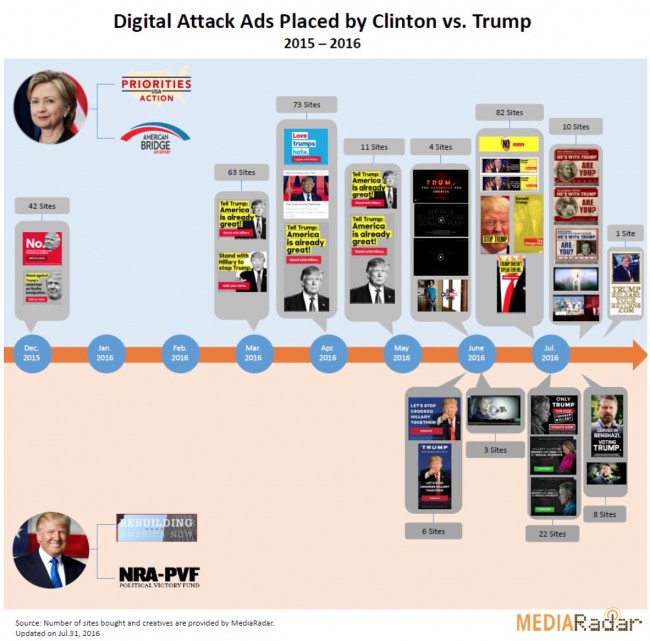