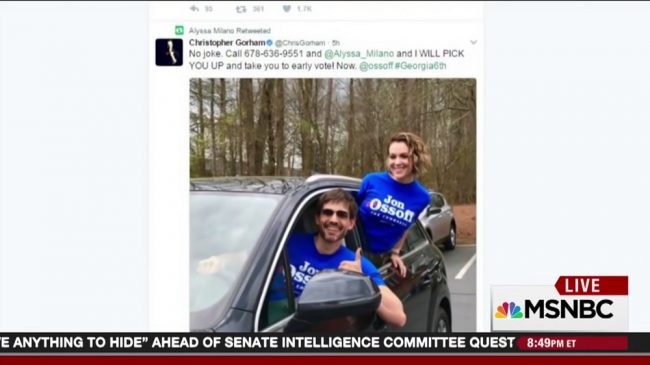 Democrat Jon Ossoff failed to reach the required majority in Tuesday’s special election to win the former congressional seat of HHS Secretary Tom Price in Georgia — even though he had raised $8 million in campaign funds, with the help of celebrities like Jane Fonda.

Many liberal denizens of Hollywood did their best to push Ossoff across the finish line. Actor John Leguizamo, best known for his role in the Ice Age animated movies, hyped the need for his peers to come to the aide of the candidate: “We have to do whatever we can, [so] we all gotta get woke, and that’s the mandate. I wish there were more outspoken celebrities, athletes, artists, people with high profiles.”

It appears that their efforts weren’t enough to say the voters in the 6th congressional district. However, this hasn’t stopped some of the star power from staying involved.

Actress Alyssa Milano, a native of New York City, who flew to Georgia to drive people to early voting locations, devoted a series of Twitter posts late Tuesday evening and on Wednesday to getting the liberal candidate elected:

This is a red seat and state, the fact that Jon @Ossoff came in first is huge. #FlipThe6th https://t.co/c9WdyjjWPs

Here are 6 things you should know about Republican Karen Handel ahead of the Georgia runoff election https://t.co/S8hzlqPMUM #FlipThe6th

Milano even lashed out at another Twitter user for “mansplaining” the election results to her:

Thank you for mansplaining, Brian. https://t.co/k72Cjd2ysR

The former Who’s the Boss? star, along with her fellow celebrity activists, have yet to realize that such a grating attitude might not be helpful for the liberal candidates that they back. After all, why should a resident of the Georgia congressional district — who might be more concerned about getting their I-85 route to work repaired after the recent fire — care what a multimillionaire thinks about their local election?

It’s not like Milano and her celebrity peers have a good track record in recent elections. In 2016, she first endorsed Bernie Sanders for president, as he is apparently a “really honest, cool dude.” She later joined “a group of illustrious women,” as CNN hyped them, to sing the praises of Hillary Clinton after she won the Democratic presidential nomination.

During the last weeks of the presidential race, many celebrities cut “preachy” videos for Mrs. Clinton, but it was to no avail.

However, if these narcissistic Hollywood types want to repeat their efforts with Ossoff, by all means, let them waste their money and time inside a district that former Rep. Price won by double digits.