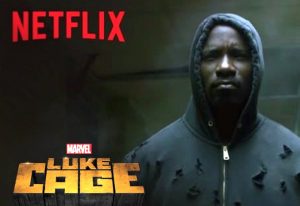 Superheroes fight forces of evil. They possess fantastical powers, like the ability to leap tall buildings in a single bound, and use invisible planes and truth lassoes. You know them by name from your childhood days: Wonder Woman, Cat Woman, Superman, Spiderman, Batman and the like. They wore capes, and represented the good citizen — not the criminal.

That is, until Netflix decided to collaborate with Marvel Televisions and ABC Studios to bring America its first black Super-thug, masquerading as a Superhero. You really couldn’t make this stuff up if you tried. Netflix’s show Luke Cage is about a prison escapee, hoodie-wearing, black man armed with superpowers.

Mr. Cage fights for “social justice” in Harlem; because of course, all black people live in Harlem (eye-roll). According to a Newsbusters’ article about the 13-episode series, there’s a scene in the first episode where someone passes out a flyer that reads: “Stay Harlem. Stay Black.” It also includes a Black Lives Matter moment, just to further politicize the show.

“Obviously, there’s this Trayvon Martin thing that happened. I think everyone was shaken to the core in America who basically understood there was a black teen in his neighborhood, who was basically killed for wearing a hoodie. And it’s like this guy thought he was a threat,” asserted Mike Colter, the actor playing Cage, in an interview with Chelsea Handler.

Yeah we know. But why let facts get in the way. Martin wasn’t in “his neighborhood;” but rather, in his father’s girlfriend’s condominium complex in Sanford, Florida. The complex had experienced previous break-ins. The night Martin was shot to death by neighborhood watchman George Zimmerman, witnesses and Zimmerman testified that they saw a male dressed in a hoodie, peering into windows.

“All people who wear hoodies are not criminals . . .It’s a symbolic thing,” Colter said of having Cage wear a hoodie. A hoodie is symbolic all right; it’s the fashion of choice for criminals (and now black superheroes), who use them to hide their face from being identified by witnesses, police or surveillance cameras when committing a crime.

Making Marvel’s first black superhero into even more of a stereotype, Luke Cage’s skin became so “hardened” from doing time in the pen, where there’s mass incarceration of black men, that his skin is impenetrable by bullets (which do go through his clothing).

Wonder Woman had bulletproof bling; Luke Cage has bulletproof black skin. Ah, but this is also a metaphor for the isolated cases of unarmed young black males killed by police officers. I wonder if hooded crusader Luke Cage will serve and protect blacks in Harlem harmed by other blacks?

In his interview with Handler, Colter added that he and the show’s creator wanted to “make some statements and “shake it up a little bit.” We shall see about that, but rest assured that the show is replete with clichés and political commentary.

Not missing a beat to perpetuate Democrats’ black lies, Carl Lucas, the black Super-thug’s real name, escaped from a privately run prison in Georgia called Seagate. And this is because everyone knows that private prisons are to blame for “the mass incarceration of blacks” — not black males themselves, who are disproportionately engaging in crime, being convicted by juries and then sentenced by judges.

As the law of unintended consequences would have it, the birth of Luke Cage demonstrates Hollywood’s racist perception of blacks. In the liberal-dominated TV and film industry, blacks are cast as gangsters, criminals, slaves, prostitutes and now prison fugitive super heroes. Netflixs had an opportunity to give America a true black superhero whom black kids and all kids could look up to and admire. (Heck, maybe they were just tipping their hat to Hillary, who once famously referred to criminal black youths as super-predators.)

Instead Netflix delivered a champion of deviancy, who will encourage black kids to believe they can pick fights, confront police and have a hoodie protect them. How cool is that? Way to add to the black body count Netflix. Way to go!