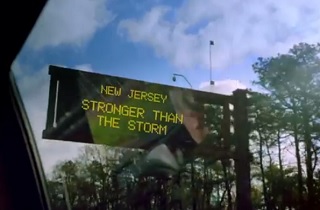 It’s hard for New Jerseyans not to get caught up in “Stronger than the storm” fever, but Governor Chris Christie‘s (R-NJ) leading home state paper isn’t catching it. The Newark Star Ledger has dropped a bomb of an editorial on Christie, accusing him of exploiting Superstorm Sandy relief aid for his own political ends. Based on reporting by the Asbury Park Press, the Ledger’s editorial board says that Christie “siphoned off money that was intended for victims of Sandy to promote himself in a series of TV ads.”

The editorial cites this reporting, by The Asbury Park Press‘ Bob Jordan:

East Rutherford-based MWW and a subcontractor are billing the state $4.7 million for employee compensation and markups to run this year’s campaign, according to information obtained through a public records request by the Asbury Park Press. The remainder goes toward TV and radio commercial production, media buys and promotions.

The contract documents shine new light on the role Christie administration officials had in the TV commercials — controversial because they give Christie more exposure during a gubernatorial election year, and also because they introduce him to voters in other states in advance of a possible 2016 presidential campaign. The top official on the selection committee, appointed by Christie, once received a $49,000 loan from Christie when he was the U.S. attorney for New Jersey.

The two bidders had different views on how the campaign should be run. MWW proposed putting Christie in the ads. The other bidder, a team headed by the Sigma Group, did not. MWW won the contract.

The Ledger editorial board is skeptical of the board that awarded the contract to MWW:

Are we supposed to believe this was a detached and unbiased review? That a Christie loyalist happened to pick the ad campaign that featured the governor and his family, and is set to broadcast in other states where he will need votes to win a presidential primary?

Sorry, we are not buying it. This stunt is legal, but it is as sleazy as can be.

It is true, as Christie’s blind defenders will say, that former Gov. Tom Kean was featured in tourism promotions. That was a mistake, too, but on a much smaller scale.

What makes this so offensive is that the money comes from federal aid intended for storm victims. So the next time the governor visits the Shore to take credit for Washington’s help, maybe the families and small business owners who are still on their knees can ask the governor why he ranked his own self-promotion as a higher priority than their relief.

In any case, unbiased or not, Governor Christie certainly could have refused to star in the ads, to avoid the appearances that the Ledger points out. The question, I suppose, is should he have? The reporting by the Asbury Park Press certainly places the process surrounding the ads in a questionable light, and I am, by no means, a fan of Chris Christie. As the Ledger points out elsewhere in their editorial, he’s got a lot to answer for politically, and if he runs for president, there will be a lot more.

But as a New Jersey resident who has been watching the rousing “Stronger Than The Storm” campaign, I’m not convinced that Christie made the wrong decision for New Jersey, or that, on this particular issue, he doesn’t deserve the credit, and the political benefit, he is receiving. His participation in the ads, so far, has been as a punctuation mark to images of the resilience of the state’s residents. Say what you will about Chris Christie, he went to bat for our state when Republicans tried to mess with federal disaster relief. Now, he’s part of a great ad campaign that’s promoting tourism in the state. I’ve seen elected officials from many other states promoting tourism, none of whom can claim the share of responsibility that Christie can.

The Star Ledger has a point that the process for awarding this contract doesn’t look good, and maybe there ought to be a law, but in this case, the punishment, a brutal excoriation of Christie, doesn’t fit the crime. I drove through that storm, I live with its effects every day, and where I live, “Stronger Than The Storm” is working, and Governor Christie is a big part of that, much bigger than the part he plays in these ads.