Homeland Security Writer Takes Credit for CNN Threat: ‘It Was a Joke’ 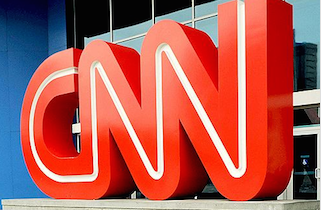 On Wednesday, several news outlets — including this one — reported the news that the same hackers who targeting Sony Pictures had turned their attention to CNN, and specifically Wolf Blitzer. Now, a man named David Garrett, Jr. who has contributed Homeland Security-related articles to the Knoxville, Tennessee version of Examiner.com is taking credit for the whole thing, claiming it was just one big joke.

The initial report originated on The Intercept where Jana Winter posted details of an FBI bulletin that cited threats against an unnamed media organization. It was The Desk’s Matthew Keys who linked that bulletin to an anonymous Pastebin post that threatened CNN and claimed to be from the same Guardians of Peace group that hacked Sony.

The text of that message read:

The result of investigation by CNN is so excellent that you might have seen what we were doing with your own eyes.
We congratulate you success.
CNN is the BEST in the world.

You will find the gift for CNN at the following address.

After the news started to spread, Garrett took to Twitter and Facebook where he quickly tried to prove that he was behind the message:

My fake pastbin post is being investigated by the FBI. I wrote for CNN to "give us the Wolf" and the FBI is actually taking it as a threat.

It was a joke. And to show that no one investigates anything. Everything is rumors. I had no idea it would be taken seriously.

But I guess I should have. I have nothing to do with that group.

You cannot rely on pastebin as a source. It is all anonymous.

He then posted a screenshot from a since-deleted December 20 post on his apparently fake Facebook account, in which he revealed what he had just posted on the anonymous site:

On the “Don Cornelius” Facebook account, which has David Garrett’s name as it’s URL, he explained in a series of posts:

Serious: My anonymous posting was just mentioned in an FBI letter.

See, what I did was, I took the message CNN claimed the hackers posted on pastebin. And there was no proof it was them. So I took it and replaced every mention of FBI with CNN. As a joke. And then, of course, I had to add Wolf Blitzer or it wouldn’t be complete. Then all these so-called “journalists” don’t get my humor.

And it fucking kills me that some of the news outlets aren’t mentioning how my CNN post was almost an exact replica of the original message.

On his other Facebook page, which does contain his name, Garrett posted this link to Gawker’s post on the story: 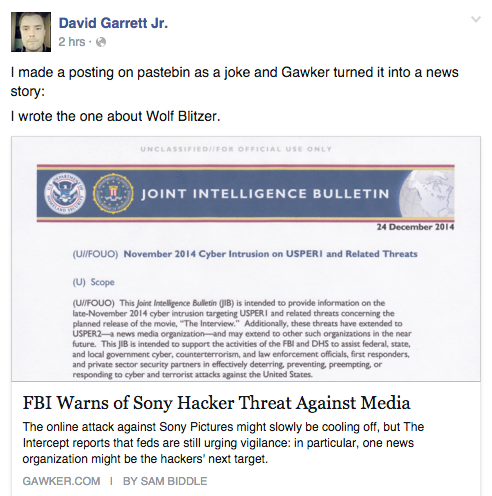 Gawker’s Sam Biddle wrote of Garrett’s threat: “There’s no way to prove that Pastebin items like [the CNN threat] are actually from the hackers—in fact, there are plenty of reasons to suspect they’re not. The inclusion of a stupid YouTube video and the added “P.S. You have 24 hours to give us the Wolf” strike me as something out of a prank, or a goofy copycat.”

In his posts, Garrett assumes that the FBI bulletin, which only references an unnamed “news media organization” stems from the Pastebin post he says he sent. While there is no direct evidence linking the presumably fake CNN threat to the FBI update, it does appear clear that his anonymous threat, including it’s oblique reference to Wolf Blitzer, did succeed in fooling a large number of journalists, including this one.

After all, it’s no more or less ridiculous that the 9/11-referencing threat against movie theaters that helped cancel The Interview’s wide release.

As Garrett put it:

I'm the boy who cried Wolf.