BuzzFeed's Jacob Bakkila is the Mind Behind Horse_ebooks

Horse_ebooks is Human, and Guess Where He Works… 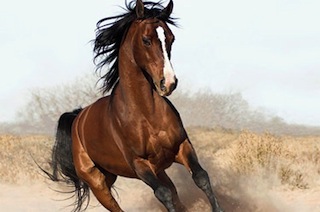 The cryptic Twitter handle Horse_ebooks—a spammy account that tweeted out snippets of found prose to the fascination of People Who Stare At Smart Phones—was revealed today to be a performance art project by two employees of BuzzFeed.

If you don’t know what Horse_ebooks is, prepare to cannonball into the interwebz deep end. The handle appeared to be a spambot, an account that tweets automatically, usually with links to products. But Horse_ebooks’ tweets—often disconnected bits of sentences, like “Inside every dog there is a perfect,” “naturally welcome to the number,” “Short of breath?” or simply “fell”—set it apart from your average bot.

“Their output has seemed strangely knowing and even portentous,” wrote The New Yorker’s Susan Orlean. Via Gawker’s Adrien Chen, “The feed’s strangely poetic stream has been embraced like a life-preserver by internet users drowning in a sea of painfully literal SEO headlines and hack Twitter comedians.”

The ominous almost-meaning of the tweets led to over 200,000 followers (including me), Tumblrs, GIFs, memes, comics, yearbook quotes, academic papers, and all the other spoils of internet stardom. Not bad for a bot, though more than one person suspected it was not a bot.

They were right. Orlean broke the story this morning:

Most of those questions will be answered today, starting at 10 A.M., at the Fitzroy Gallery, on the Lower East Side. There, the creators of the two accounts, Jacob Bakkila and Thomas Bender, will prove that they are indeed human, appearing in a performance that is the final flourish in this suite of conceptual-art pieces, weaving together Horse_ebooks and Pronunciation Book. They will also launch the next installment of the project, a choose-your-own-adventure interactive-video piece called Bear Stearns Bravo. Bakkila and Bender have been working on the project for almost four years, keeping their identities secret from just about everyone, including their colleagues at Buzzfeed, where Bakkila is a creative director, and Howcast, where Bender, until about a year ago, was the vice-president of product development.

Bakkila also said he would be ending the account’s successful run:

“No one wants to work on a painting forever,” Bakkila said the other day, as he and Bender and a small group of collaborators set up video monitors in the gallery for their day-long appearance. “When it’s done it’s done. We’re ready for the experience of whatever this next piece is.”

Bakkila told the New York Times he took over the account in 2011 from Russian web developer Alexey Kouznetsov, who founded the account to, yes, promote Horse ebooks. Bakkila has run it ever since, lending credence to those who said at the time that the tone of Horse_ebooks had changed, and that the surreally apt tweets appeared less like happenstance and more like someone with agency aiming for the feed’s niche—despite Bakkila’s attempt to recreate the randomness of the account:

He mimicked the activity of a spam account, even occasionally tweeting links to the equestrian electronics books that the account was originally set up to try to sell. To create the odd non sequitur that the account became known for, he searched for articles on weight loss, bodybuilding and other types of self-improvement and self-help and skimmed them for material that he could tweet out at random intervals.

For the rec, BuzzFeed listed @Horse_ebooks as one of its best Twitter accounts of 2011:

@Horse_ebooks is a Twitter bot that was made to promote some guy’s ebooks about horses. To avoid detection, it will occasionally post snippets of text from those books. It almost never makes sense, but therein lies the beauty.