How To Put Americans to Work? Lessons From The Great Depression 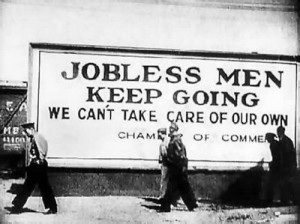 Last week, Times columnist Joe Nocera asked a simple question: what is business waiting for? Why isn’t the private sector making a determined push to put people to work? He identified a few factors: the focus on short-term profits and concern about being at a competitive disadvantage; The Atlantic‘s Derek Thompson took a wonkier look at the question. This weekend, the Times ran some responses that provide more insight.

At its core, it’s the right question to ask. In 2009, the private sector employed 83.2% of the workforce, accounting for 87.5% of the economy – and that was before thousands more government employees were fired. The private sector drives the economy. Or, as the case may be, doesn’t.

Do businesses have an ethical obligation to get people to work? The Pope gave it a shot earlier this week, suggesting that the “common good” should be considered alongside the maximization of profit. (Safe to say he wouldn’t win the Republican Presidential nomination.) But people see business decision and ethical decisions through separate lenses. From a piece at Freakonomics:

Not only are business decisions immune to ethical considerations, they may actually be antagonistic to them. It’s clear that ethics, the greater good, won’t be a winning argument by itself.

Then is there a role for the government to play in compelling business to increase hiring? That’s a key point in Nocera’s essay: examples from Europe in which hiring was increased by, among other things, capping the number of hours people can work. In June of 1933, President Roosevelt and Congress established the NRA – the National Recovery Administration. The NRA pushed for broad, industry-wide standards that would increase hiring and job quality: maximum hours per week, a minimum wage and, in some cases, price controls. The idea, as Jimmy Durante advocates in the video above, was that by reducing the competitive disadvantages of any one business implementing these measures by itself, more people could be put to work.

The NRA was wildly popular with the public – and with big businesses. The former, obviously, saw increased employment opportunities and often higher wages. The latter saw an opportunity to set standards that diminished smaller competition. The initiative worked: industrial production and hiring increased dramatically.

The public popularity meant that there was a great deal of pressure for businesses to comply. Businesses working under NRA standards used the blue eagle pictured at right as a sort of emblem of patriotism. Those that didn’t comply and didn’t show the eagle were often boycotted.

Unsurprisingly, two things happened. First, a black market arose, in which goods were priced below the NRA standard. Second, the Supreme Court declared the bill that spawned the NRA unconstitutional, for regulating non-interstate commerce. The NRA was dismantled in 1935 – though some of the its initiatives were included in the Wagner Act of the same year. America’s most direct experiment with a controlled economy was short-lived.

What does this mean for America, circa 2011? Simply this: that only two things can compel businesses to start hiring.

First, market forces: a demonstration that hiring will be good for business over the long- (and short-) term.

Or, second: public image and public support. Remember after September 11th when companies made a direct appeal to patriotism as a marketing technique? What if companies used a different patriotic tack – putting people to work – as a marketing hook? What if, in other words, some major employer that could weather a short-term hit to its bottom-line publicly and audaciously took on more workers? It seems likely that the public response would be overwhelmingly positive – and could perhaps open the floodgates.

But there’s a market in doing right by people. One that remains basically untapped.