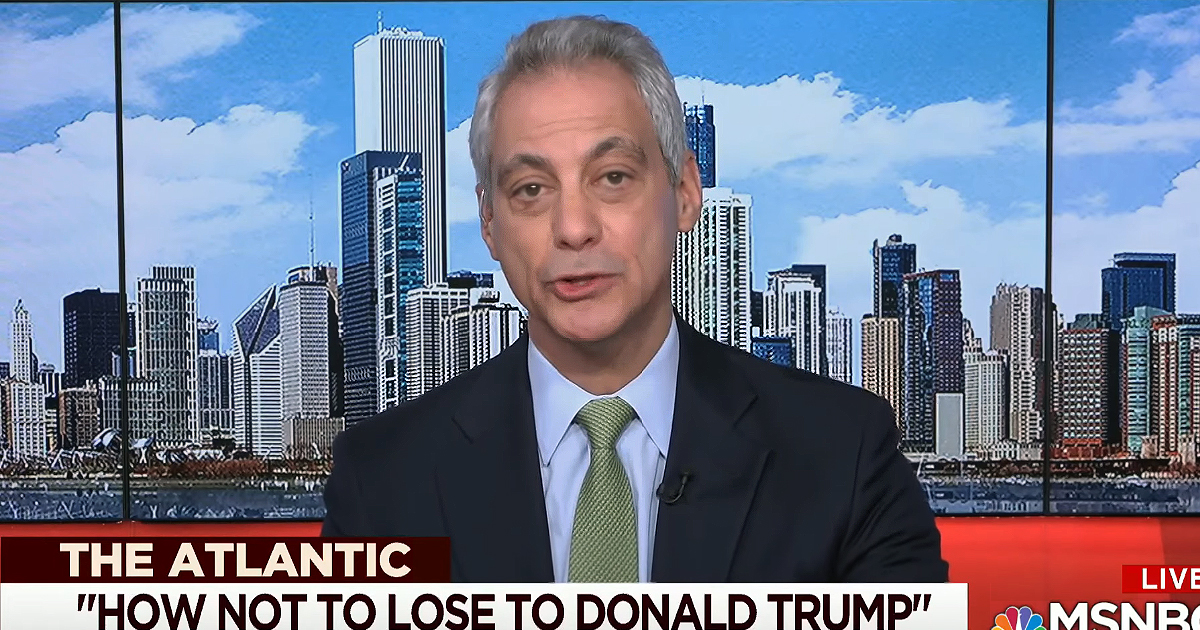 “If the Democrats don’t listen to Rahm, they could be in big trouble,” said Fox News media critic Howard Kurtz on Tuesday for Fox Digital. He was talking about Chicago Mayor and former Obama chief of staff Rahm Emanuel, who is warning about Democrats blowing their chances in 2020.

Emanuel wrote an op-ed for the Atlantic over the weekend arguing that the Democrats are not just in danger of self-destructing before the election, but are already on the path to it.

The mayor first noted some of the marks counting against Trump, besides the obvious, including his inability to use the good economy to his advantage, and his polling disadvantages when in electoral college must-have states.

But, wrote Emanuel, that doesn’t make the election a given. His op-ed argues that Trump has already shown his playbook, to “convince” voters that Democrats believe in social control, big government, and socialism. And Democrats are making it easy, he argues.

If 2016 proved nothing else, it demonstrated that Democrats ignore Trump’s antics at our own peril. In much the same way Democrats shouldn’t paint his supporters with a brush so broad that it alienates convincible voters—anyone else game to banish the word deplorable from the 2020 campaign?—the last thing we should do is serve him slow pitches over the plate that allow him to define us on his terms. Unfortunately, that’s exactly what Democrats have been doing since he went before Congress in early February. It’s almost as if we’ve been duped into reading from his ready-made script.

Earth to Democrats: Republicans are telling you something when they gleefully schedule votes on proposals like the Green New Deal, Medicare for all, and a 70 percent marginal tax rate. When they’re more eager to vote on the Democratic agenda than we are, we should take a step back and ask ourselves whether we’re inadvertently letting the political battle play out on their turf rather than our own. If Trump’s only hope for winning a second term turns on his ability to paint us as socialists, we shouldn’t play to type.

Kurtz, who wrote and recorded his own riff off of Emanuel’s op-ed, doesn’t attribute the characterizations of Democrats to an attempt by Trump to “convince” voters, but to the track record the Democrats are actually establishing in their already well underway primary.

I’ve been arguing that the Democrats, who regained control of the House in November mainly on the strength of more moderate candidates, are increasingly being defined by their most extreme members.

Just look at the last few weeks, and the stances embraced by some of its presidential contenders and younger members: Slavery reparations. Green New Deal. Medicare for All. Free college tuition. A 70 percent tax rate on income over $10 million. Break up Amazon, Facebook and Google.

But whether it is an effort to paint Democrats that way, or they are doing it themselves, both agree the consequences for the party’s prospects won’t be positive.

In his article, Emanuel lays out the key characteristics needed for a winning campaign and candidate, citing Clinton, Obama, and even Reagan for examples. The analysis should be seen as prescriptive, and a wise candidate would heed the advice.

He also warns: “The president’s low approval ratings suggest that, if he wins a second term, Democrats will have no one to blame but ourselves.”