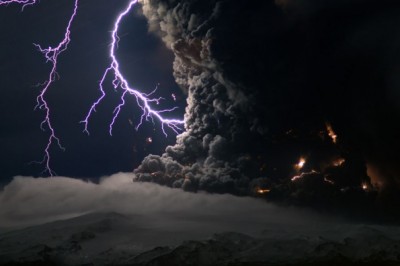 News surfaced yesterday that the Icelandic Volcano eruption is not only refusing to abate, but that it might also spark further volanic eruptions nearby. Anderson Cooper reported on the potentially scary scenario last night. Video follows below:

But first, since the visuals of this particular news story look like a Jerry Bruckheimer movie, its easy to imagine what the dialogue would sound like.

So without further ado, here is a small bit of the trailer to the imaginary movie, End Of Days: Volcano!

VO: In a world gone mad with creature comforts and man made spectacles…no one expected that the end of days would come from deep within the earth. (Pause) No one that is, except Dr. Hank Portnoy.

VO: From director Jerry Bruckheimer, a new movie about the last days on earth and the rebellious Doctor who tried to save the world…

Portnoy: Sweet Jesus! Can’t you see?! That volcano in Iceland isn’t working alone…there are other volcanoes just waiting to erupt!

VO: …the woman who loved him…

Sarah Godspeed: I can’t do this for you.

Portnoy: But you have to!

Godspeed: I can’t say no to you

VO: …and the evil forces that held him down…

Dr. Malcon : Your numbers DO add up Portnoy, but until you recognize MY theories, you’re going nowhere!

VO: Iceland has never been so strange

Portnoy: (yelling) Get me Bjork!

VO: Nor this dangerous

VO: This movie is not yet rated.