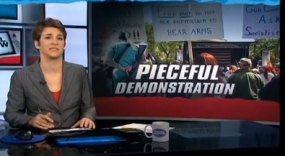 Interesting. On last night’s show Rachel Maddow opted not to cover the DADT demonstrations at the White House yesterday, despite the police’s stunning decision to remove the White House Press from the scene (Ben Smith said he’d never seen anything like it). Instead she opted to spend ten minutes on the lightly attended gun rallies that took place in and around Washington D.C. on Monday to mark Patriot’s Day (also, the anniversary of the Oklahoma City Bombing).

Maddow has spent a lot of time on her show discussing the rallies, and the pro-gun movements, and the high rhetoric that sometimes accompanies them, so it makes sense that she’d follow up — something she couldn’t do Monday night due to her hour-long McVeigh special . Except, that those rallies, much pumped up in the weeks beforehand, make barely a blip on the news radar on Monday (even Fox barely covered them). Whereas, yesterday’s DADT demonstrations — during which Lt. Dan Choi and 5 fellow gay service members handcuffed themselves to a White House fence — resulted in the press being barred from a protest taking place at the White House. That to me is news. Particularly as it follows President Obama being heckled by gay rights protesters at a fundraiser on Monday. Anyway, interesting choice. And one that doesn’t help knock down the growing perception that the media is pumping up the rhetoric as much as anyone else, particularly considering how MSNBC seemed determined to link the McVeigh special to the Tea Party movement. Video of Maddow’s gun segment below.