If MSNBC Sacks Pat Buchanan, Will They Have To Answer For Al Sharpton?
INSIDE CABLE NEWS

If MSNBC Sacks Pat Buchanan, Will They Have To Answer For Al Sharpton? 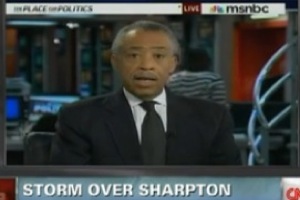 We still don’t know what Phil Griffin and MSNBC will ultimately do with regard to the Pat Buchanan situation. What we do know is that if Buchanan is taken out permanently, there will be blow-back. And let’s start with what will likely become the focal point for those who take issue with Buchanan getting taken off permanently.

To remind everyone, here is what Phil Griffin said at the TCA concerning Buchanan.

“The ideas he put forth aren’t really appropriate for national dialogue, much less the dialogue on MSNBC.”

This would put MSNBC in a real quandary. If it takes Buchanan out, but leaves Sharpton in place, it’s opening itself up for a whole bunch of questions it really doesn’t want to answer. It will be forced to discuss how Buchanan’s controversial history is not appropriate to the point that he has to be taken off the air, but Sharpton’s at times even-more inflammatory rhetoric and history, remains on. MSNBC doesn’t want to discuss that. It’s a lose-lose scenario.

The subject would next parry to how MSNBC could justify keeping Sharpton on the air if it got rid of Buchanan. Another lose-lose scenario. The conventional wisdom is Sharpton appeals to the Progressive demographic and that’s a core constituency MSNBC does not want to alienate right now because of the perceived threat from the even more leftward bent Current TV. Some would say MSNBC is paranoid about Current TV. I think the threat is vastly overstated because Current hasn’t shown that it can even do the most basic rudimentary cable programing things correctly. Look at Keith Olbermann’s set, or the network’s premature cut-out of the Iowa caucuses. And then there’s the hiring of Jennifer Granholm who isn’t exactly a progressive firebrand of the type that Olbermann and Cenk Uygur are. Given all that, plus the Al Gore-backed channel’s poor distribution, one could easily argue that Fox Business Network is a bigger threat to CNBC than Current is to MSNBC.