If You Like Your Kettle You Can Keep It: Mitch McConnell Decries ‘Double-Standard’ on Nuclear Option
video

If You Like Your Kettle You Can Keep It: Mitch McConnell Decries ‘Double-Standard’ on Nuclear Option 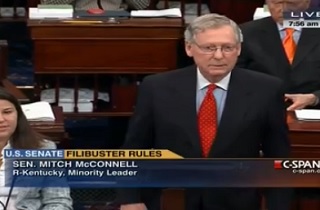 Senate Minority Leader Mitch McConnell got chuckles from some of his colleagues this morning when he made a wisecrack about Senate Majority Leader Harry Reid‘s (D-NV) previous assurances not to change Senate filibuster rules, saying “He might just as well have said ‘If you like the rules of the senate, you can keep them.”

The jab came as Sen. McConnell was decrying a “double standard” on filibustering judicial nominees, which, when multiplied with McConnell’s own previous support for the “nuclear option,” makes it a… quadruple-standard?

“Then there are the double standards,” McConnell said. “When Democrats were in the minority, they argued strenuously for the very thing they now say we will have to do without. Namely, the right to extend a debate on lifetime appointments — to extended debate on lifetime appointments. In other words, they believe that one set of rules should apply to them, and another set to everybody else. He may have just as well have said ‘If you like the rules of the Senate, you can keep them.”

While it should surprise no one that when the Democrats were in the minority, many of them opposed ending judicial filibusters, I’m sure that Mitch McConnell would be shocked, SHOCKED to learn that the Republican Senate Majority Whip supported the nuclear option when his party was in the majority. That man’s name was Mitch McConnell. See if any of this sounds familiar, from The Congressional Record:

This is about using the filibuster to kill nominations with which the minority disagrees so 41 Senators can dictate to the President whom he can nominate to the courts of appeal and to the Supreme Court.

…Our debate is about restoring the practice honored for 214 years in the Senate of having up-or-down votes on judicial nominees. Never before has a minority of Senators obstructed a judicial nominee who enjoyed clear majority support.

Our friends on the other side of the aisle recite a list of nominees on whom there were cloture votes, but the problem with their assertion that these nominees were filibustered is that the name of each of these nominees is now preceded by the title “judge,” meaning, of course, they were confirmed.

So what my Democratic colleagues did last Congress is, indeed, unprecedented. Even with controversial nominees, the leaders of both parties historically have worked together to afford them the courtesy of an up-or-down vote.

…Just 2 years later, after they had lost control of the Senate, our Democratic colleagues began to filibuster qualified judicial nominees who enjoyed clear majority support here in the Senate. They did so on a repeated partisan and systematic basis. After 214 years of precedent, in a span of a mere 16 months, they filibustered 10 circuit court nominees–totally without precedence. Many of these nominees would fill vacancies that the administrative offices of the courts have designated as judicial emergencies, including several to the long-suffering Sixth Circuit Court of Appeals, in which my State is located. As a result, President Bush has the lowest percentage of circuit court nominees confirmed in modern history, a paltry 69 percent.

The Senate, as we all know, works not just through the application of its written rules but through the shared observance of well-settled traditions and practices. There are a lot of things one can do to gum up the works here in the Senate, a lot of things you could do. But what typically happens is we exercise self-restraint, and we do not engage in that kind of behavior because invoking certain obstructionist tactics would upset the Senate’s unwritten rules. Filibustering judicial nominees with majority support falls in that category. Let me repeat, it could have always been done. For 214 years, we could have done it, but we did not. We could have, but we did not.

By filibustering 10 qualified judicial nominees in only 16 months, our Democratic colleagues have broken this unwritten rule. This is not the first time a minority of Senators has upset a Senate tradition or practice, and the current Senate majority intends to do what the majority in the Senate has often done–use its constitutional authority under article I, section 5, to reform Senate procedure by a simple majority vote.

That last part is not a misprint, that’s Mitch McConnell citing the U.S. Constitution to justify an action that he now says violates the rules of the Senate. Well-argued, sir.

There’s nothing necessarily wrong with changing your mind about an issue like this. Sen. McConnell delivered a well-reasoned argument in favor of the nuclear option in 2005, even if it does sound a lot like the argument Harry Reid is making now. It does take a certain amount of gumption to slam someone else for changing his mind, even as you’ve just changed yours back.