How 4chan Rules the Internet | Anonymous 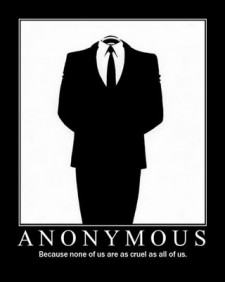 Editor’s note – this post was originally published in July of 2009, but given the recent prominence of both 4chan and “Anonymous” with regards to both “Operation Payback” and WikiLeaks, it serves as a wonderful primer for those initiated with the the crowdsourced set of vigilantes – or hactivists as the mainstream media has taken to calling them.)

When AT&T blocked 4chan on Sunday, every blogger who knew what was what could see the dark clouds looming on the horizon. “AT&T Reportedly Blocks 4chan. This Is Going To Get Ugly” was TechCrunch’s headline. “AT&T Has Managed To Piss Off the Wrong Bunch of Web-Nerds” was Gawker’s. “AT&T did the Internet equivalent yesterday of poking a beehive with a stick: the company blocked parts of 4chan,” Pete Cashmore began a post. Net neutrality was as respectable a journalistic hook as any, but a key part of the equation was: 4chan is scary. When AT&T restored service, and when they claimed that they had only suspended it to stop a DDoS attack (moot, the founder of 4chan, said “this wasn’t a sinister act of censorship, but rather a bit of a mistake and a poorly executed, disproportionate response on AT&T’s part”), the whole Internet breathed a collective sigh of relief. A crisis had been averted. 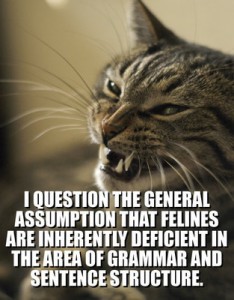 4channers, you see, are a formidable bunch. In Malcolm Gladwell’s terms, they are “influencers,” hubs at the center of many spokes that know how to exert power in every direction.  Anonymous, the crowdsourced vigilantes who have pulled off stunts as varied as punking Scientology, uploading lots of porn to YouTube, and supporting the Iranian demonstrators, have a strong presence on 4chan, though they are not strictly affiliated with the site. In April, 4chan users famously hacked the Time 100’s online poll to make moot, the site’s owner, the most influential person in the world. In a fascinating account of the hack that speaks volumes about 4chan, Paul Lamere writes:

Ultimately, this hack involved lots of work and a little bit of luck. Someone figured out the voting URL protocol. A bunch of folks wrote various autovoters, which were then used by a thousand or more to stack the vote in moots favor. Others, sprinkled the spam urls throughout the forums tricking the ‘competition’ into voting for moot. When Time.com responded by trying to close the door on the hacks, the loose collective rallied and a member discovered the ’salt’ that would re-open the poll to the autovoters. The lucky bit was when Zombocom discovered that no matter what he did, he wouldn’t get banned. This opened the door to the fine grained manipulation that led to the embedding of the Message.

At the core of the hack is the work of a dozen or so, backed by an army of a thousand who downloaded and ran the autovoters and also backed by an untold number of others that unwittingly fell prey to the spam url autovoters. So why do they do it? Why do they write code, build complex applications, publish graphs – why do they  organize a team that is more effective than most startup companies? Says Zombocom: “For the lulz”.

The Internet runs on lulz, the lulz of a few. LOLcats started on 4chan; so did “Chocolate Rain” and the Rick Roll; so did those fake motivational posters; so did Candlejack and ‘so I heard you like Mudkips’ and some awful racist memes that thankfully didn’t make it to the big leagues. You might like to think that memes, those collective ideas or jokes that everyone suddenly has or tells at the same time, are democratic, that they just randomly sprout up from anywhere and from anybody like some goofy in-joke that catches. But that’s rarely how it is. So many have been carefully planted, nurtured in secret, incubated in Hell’s hatchery — thought up by a bunch of creative, remorseless kids on 4chan.