Imam Abdul Rauf Says The Mosque Debate Is Good For Islam Relations, What Do You Think? 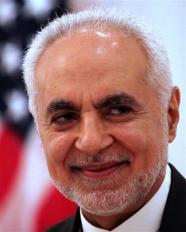 At the center of the debate over the proposed Islam cultural center a few blocks from Ground Zero is the Imam behind the project, Abdul Rauf. Over the course of the debate, he and his wife have been depicted as both heros and terrorists, (sometimes by the same people). Throughout the debate, the Imam has kept fairly quiet, however an interview published today with the Bahraini newspaper, Al Wasat, is filled with his thoughts on the ubiquitous controversy. His remarks, of course, will be twisted and turned by people on both sides of the fight.

Some of his comments, given during a U.S. State Department funded tour of the Middle East with emissaries of other faiths to promote religious tolerance, one would expect would be embraced by all Americans were they said by anyone else in any other situation like where he favorably compared our form of government to those in that area of the world.

“‘American Muslims have the right to practice their religion in accordance with the Constitution of the United States,” Rauf said. ‘I see the article of independence as more compliant with the principles of Islam than what is available in many of the current Muslim countries.'”

Very nice of him to say, obviously. However, his comments on the current backlash may be hard for even the “Ground Zero Mosque’s” supporters to agree with. Rauf claims that he sees all the attention that the project is getting as a sign of success. That’s an interesting idea.

The debate has clearly brought to the surface a lot of uneasiness that many Americans have with Islam. This, in theory could be a good thing and it has been in some cases. Discussions have been held about the reasons (besides the obvious extremist violence) that Americans don’t trust one of the most popular religions in the world (it’s treatment of women and gays, et al). However, this conversation, with the flashy “Ground Zero Mosque” tag, has been a late summer ratings boom for news outlets and, as such, has frequently been boiled down to the most simplistic of terms (“Muslims want building, Normal Americans don’t” or “Muslims want building, Racists don’t”) and that has fueled hatred on both sides.

The Imam has always said that he wanted this project to inspire dialogue between Islam and the western world. That has happened. However, much of that dialogue has turned very, very ugly. This could all end up being a necessary bump in the road towards peaceful cohabitation but it’s getting hard for the cynics amongst us (this writer included) to see a light at the end of the tunnel. If the whole thing just ends up causing anger and hatred, both sides will inevitably blame the other (“You should have let them build it, bigots!” or “They shouldn’t have wanted to build it there in the first place, idiots”) and both will kind of be right and it will all just be pretty sad. As we seem to draw closer and closer to that outcome, the Imam’s comments are starting to sound a little naive.